Since Joe Biden announced his presidential run last Thursday, pundits have called him an instant frontrunner, convincing themselves that the former vice president is the lone candidate who can emerge from the infinitely deep pool of Democratic hopefuls in a battle against Donald Trump. Buoying Biden’s electability, they say, is his appeal to the working class that secured Donald Trump’s victory in Democrat-leaning swing states in 2016. Biden is, in words inferred but not explicitly stated, the Democrats’ latest great white hope in the fight to moor a sinking white nationalist ship to some harbor of respectability unsullied by Trump’s controversies, bigoted policies, and boorish leadership.

Yet the media narrative about Biden tends to focus exclusively on working-class whites, downplaying the multiracial, working-class coalition needed to advance progressive policies and unjustifiably hinging Democrats’ success on a man whose record mostly illustrates that he is the least deserving of the coronation.

Assumptions about Biden’s candidacy — that winning over working-class Trump voters is the primary key to victory; that the working class does not consist of nonwhites who would be averse to Biden’s history of racist rhetoric and corporate shilling; and that Biden could appeal to the working class enough to defeat Donald Trump — fall apart with even marginal scrutiny.

Accepting these tropes uncritically could lead Democrats down another path of failure — and they’d undoubtedly undermine the chance for progressive policy victories.

The first assumption depends on a misreading of the 2016 election: that working class, presumably white voters, catapulted Trump to victory in the Rust Belt, and Democrats thus need someone that can win them back into the fold. But in 2016, Trump won key battleground states not because of some large-scale shift among white voters from Obama to the Republican Party, but because more Democrats stayed out of the voting booths entirely.

In Michigan, Pennsylvania, and Wisconsin, the three states that ultimately decided the election, Trump only got 400,000 more votes than Mitt Romney. This could be explained at least in part by population growth, as Trump won with virtually the same margin of white voters as Mitt Romney. However, Hillary got 680,000 fewer votes than Barack Obama in these battleground states, indicating that Obama voters went somewhere — but not necessarily to Donald Trump.

In fact, black and white voter turnout fell in both Wisconsin and Michigan between 2012 and 2016. In Wisconsin, black voter turnout dropped to its lowest level in recorded history, from about 79 percent to 47 percent, amounting to about 87,000 fewer votes. Clinton lost the state by an estimated 23,000 votes.

The story of 2016 is really about nonvoters. And the story of 2020 should be about how to advance a politics that can energize and engage those nonvoters.

Yet the conclusion widely drawn from 2016 — where 57 percent of white voters chose a Republican candidate, in line with every other presidential election in the past nineteen years — is that appealing to working-class, white Trump voters is necessary for the next Democratic challenger. Trump’s 2016 victory — where he won over white voters with no college degree — was less a bellwether than business as usual for white voters: since 1968, 55 percent of them on average have voted for a Republican president.

But rather than center their efforts on progressive nonvoters, establishment Democrats are eagerly citing offhand anecdotes about Biden’s hometown of Scranton, his support from some labor unions, and, it seems, simply pointing to his identity as white and male.

To be clear, no working-class constituency should be written off. Polls show that union membership is a crucial variable in shaping the voting habits of white workers in particular, giving them a common sense about the economy and society that is more in line with progressive politics. Populist rhetoric can also move the needle: Obama won over a fair number of non-college educated white voters in 2012 by painting Mitt Romney as an out-of-touch corporate executive. But prioritizing the slice of white workers that voted for Trump instead of, say, poor and working-class voters of all races who didn’t go to the polls in 2016, makes little sense.

It also leads to a distorted picture of just who comprises the working class. Even when discussions turn to the Rust Belt, often forgotten are the black working-class communities in former steel towns and industrial centers that have endured extraordinary job loss and exponential declines in their quality of life due to deindustrialization and Third Way triangulation, which Biden advanced. From Chicago to Milwaukee to Cleveland, black people in northern industrial towns have jobless rates and income gaps that outpace the rest of the country and homeownership rates that have reverted to 1968 levels. Instead of an aggressive jobs program, working-class black communities got mass incarceration — destabilizing households and ravaging neighborhoods. Industrial cities had a disproportionate number of black men in the manufacturing sector where union labor was prevalent. When offshoring displaced those jobs, and the Great Recession destroyed whatever wealth black households accrued after the passage of pivotal Civil Rights legislation, black families more than any other demographic failed to recover.

Yet these are not the images that proliferate in mainstream news cycles. We don’t hear that the US working class is more diverse than ever or that people of color will make up a majority of the working class by 2032.

This oversight does not merely train Democrats to bypass what should be its natural constituency (workers of all races). It advances a racist conception of the working class that divides them internally. White workers, we are told, are deserving of our sympathy — they are hard-working Americans. People of color, on the other hand, aren’t even workers — so they couldn’t be part of the “economically anxious.”

Google Trends indicates that, for the search terms “white working class ” and “black working class” since 2016, the latter barely registers in the country’s consciousness. 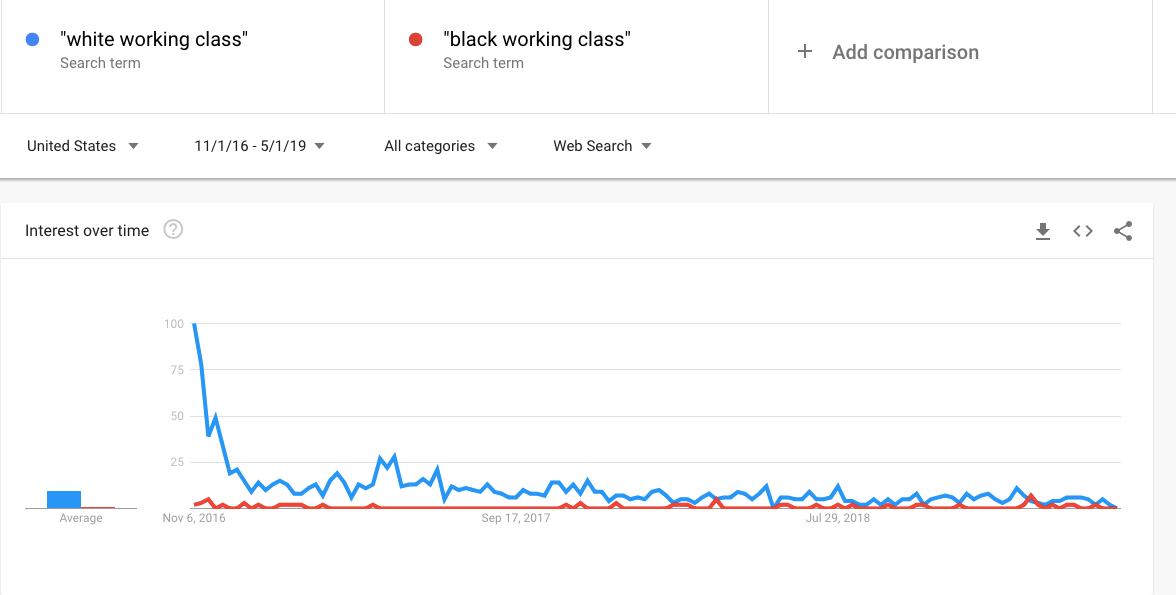 This is devastating for progressive politics — and a boon to people like Joe Biden, who have little to offer workers — black, white, Hispanic, Asian, indigenous — other than a blue-collar veneer. Peering through Biden’s record, as writer Branko Marcetic observes, it is clear the veteran Democrat has spent much of his political career advancing establishment interests instead of bucking them, from his votes “for NAFTA, the repeal of the Glass-Steagall Act, and Clinton’s 1996 welfare reform.” When given the chance, Biden has often sided with corporations and big banks, not the working class.

For an egalitarian society to emerge from the crumbling communities failed by American individualism and white supremacy, we need to construct a coalition rooted in the working class of all races. And Joe Biden doesn’t belong in it.