For decades, the Left had been trying to come up with a slogan that was both inclusive and oppositional. A slogan that put a relatively complex critique of class society in the populist language of American egalitarianism — something that spoke to a widespread sentiment that the elites had gotten too wealthy and powerful and had to be reined in.

But a recent Vox article, citing TED talker and New York Times columnist Anand Giridharadas, casts doubt on just who gets to sit at that 99 percent table. It seems one-percenter privilege is haunting quite a few of us:

‘Don’t console yourself that you are the 99 percent,’ he says. ‘If you live near a Whole Foods; if no one in your family serves in the military; if you are paid by the year, not the hour; if most people you know finished college; if no one you know uses meth; if you married once and remain married; if you’re not one of 65 million Americans with a criminal record — if any or all of these things describe you, then accept the possibility that actually, you may not know what’s going on, and you may be part of the problem.’

Before you go after the one percent, Giridharadas says, take a look at yourself. Kill the one-percenter within. Check your privilege.

But instead of explaining what it actually means to be among this tiny sliver in terms of concrete earnings, accumulated wealth, or class position, Vox and Giridharadas rely on strange descriptors that Vox considers “privileges.”

By forcing the middle class to divert their attention downward (and within) instead of at the real power players above, Vox and Giridharadas are playing into the Right’s hands. It’s an attempt to shame the middle class — those with some wealth but, relative to the top one or one-tenth of one percent, mere crumbs — to make them shut up about the rich and super rich and, instead, look at those below as a reminder that it could all be much worse.

Let’s take a closer look at Giridharadas’s list of supposedly 99 percenter traits and find out just how representative they are of the bulk of the US population.

Only 5% of adults have ever used meth. A quick perusal of Whole Foods’s site shows a location in every major metropolitan area in the United States — and as of 2010, 80.7% of Americans live in urban areas. More than a third of Americans hold a college degree. And although 57% of those under fifty have an immediate family member who’s served in the military, only a third of those under thirty do. That’s a far cry from 99%.

But the one-percent concept isn’t about a lifestyle or individual consumption habits — a graduate degree and a kale smoothie do not a one-percenter make. It’s based on concrete socioeconomic relations first brought to popular attention in an academic study by economists Emmanuel Saez and Thomas Piketty — a study that specifically charted the enrichment of this tiny minority amid the economic stagnation and impoverishment of nearly everyone else.

The one percent isn’t some amorphous boogeyman inside all of us, as Vox seems to believe. It’s a very real class. And we don’t need a list of cultural “symptoms” of one-percent-style privilege to figure out who they are. Just run the numbers.

If your household — or to be generous, the one you grew up in — makes an adjusted gross income of at least $343,000, you are, in fact, the one percent. Even if you smoke meth, went to boot camp, and are on your third marriage. Yes, even if most of your friends didn’t finish college and live kinda far from a Whole Foods.

Now, if you or the household you grew up in make an adjusted gross income of less than $340,000, you are, technically, the 99 percent. Even if you’ve never seen combat, hang out with college-completing dorks, and are too chicken shit to smoke crystal.

In other words, Giridharadas’s checklist is bullshit — it reads like a wealthy New Yorker whose only concept of flyover America is an episode of Justified. But what then is one-percentdom? Is it simply earning north of $340,000 a year? $10,000 less and you’re Tom Joad, $10,000 more and you’re the Monopoly Man?

No — it’s about the class it places you in.

The category of class, after all, is relational — not gradational. Most of the super rich get their money by virtue of exploiting the labor of others and holding private property — corporate shares, real estate investments, bonds and treasury bills, etc. —  that they will fight tooth and nail to protect.

Even when the income of the one percent (mostly the bottom half of that select group) is derived primarily from high salaries (as opposed to returns on investment) it’s far more likely to be reinvested in shares, bonds, and real estate — and of course elite educations and other opportunities for their children — than the income of the middle 40 percent, who have hardly anything left once the bills are paid.

That means that even with nothing more than a killer W-2, the salaried lower half of the one percent still have the means to consolidate themselves as an elite class while the rest of us are immiserated.

When a cut in capital gains taxes is paid for by hiking state tuition and slashing social services, the one percent benefits while the vast majority of the 99 percent loses. When a new law is passed making it harder to organize a union or wages are squeezed to ring out higher and higher corporate profits, it’s the one percent — and their investment portfolios — that benefits and the majority of the 99 percent who loses.

It’s real winners and losers — not a state of mind and not a “culture.” And it works like this: 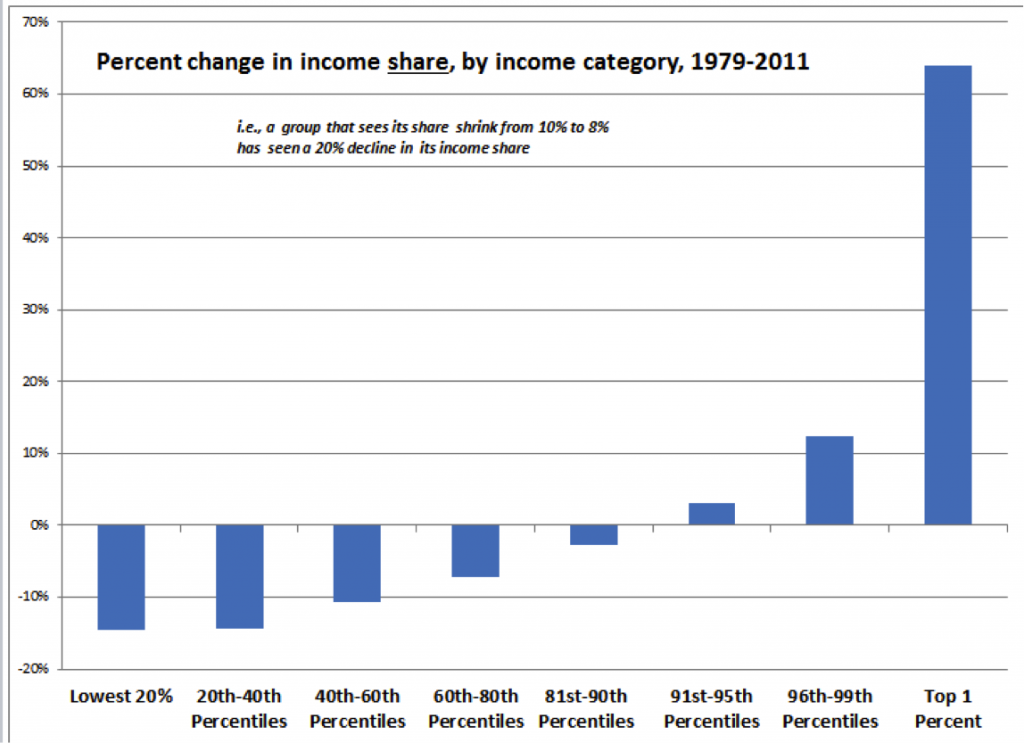 What’s bad for you economically is probably good for them. That’s why the rest of us will have to come in conflict with this tiny elite and its institutions if we’re going win a more just and egalitarian future for ourselves.

By substituting class relations for an arbitrary list of “privileges,” Vox is attempting to paint a picture of an immiserated America with no villain. It’s an America without a ruling class that directly and materially benefits from everyone else’s hard times. And this omission isn’t just incorrect — it robs us of any meaningful oppositional politics that could change it all.

It’s a conclusion that, despite Vox’s endorsement, plays into conservatives’ hands. Like the journalist Robert Fitch once wrote, it is the aim of the Right “to restrict the scope of class conflict — to bring it down to as low a level as possible. The smaller and more local the political unit, the easier it is to run it oligarchically.”

So why turn inward? Why argue over who’s got the sweeter deal and how we’re all responsible for the gross inequity of society when it’s not that much more than a tiny sliver of millionaires and billionaires at Davos sipping wine and rubbing shoulders with politicians?

Let’s try worrying more about knowing thy enemy — and building solidarity from that recognition. “Check your privilege?” Sure. But for once, let’s try checking it against the average hedge fund manager instead of a random Whole Foods shopper.