Commenters on my blog claim the graph tells us nothing about the Nazis and capitalism; it only tells us that the economy improved under the Nazis. As it did in the United States under FDR. So maybe the graph plotting capital’s return under Nazism just shows general improvement in the economy in the 1930s, an improvement widely shared throughout the industrial world?

Luckily, Suresh Naidu, the kick-ass economist at Columbia, supplied me with the following graphs.

This first one, which comes from Thomas Piketty’s Capital in the Twenty-First Century, compares the share of national income that went to capital in the US and in Germany between 1929 and 1938. Suresh tells me that the share roughly tracks capital’s rate of return.

Long story short: capital was doing better under the Nazis than under FDR. Not because of overall increases in economic performance in one country versus another, but because of the economic policies of the regime. Or so Suresh tells me. (Usually academics are supposed to acknowledge their debts to their friends and readers but own all errors as their own: in this case, I’m blaming everything on Suresh.) 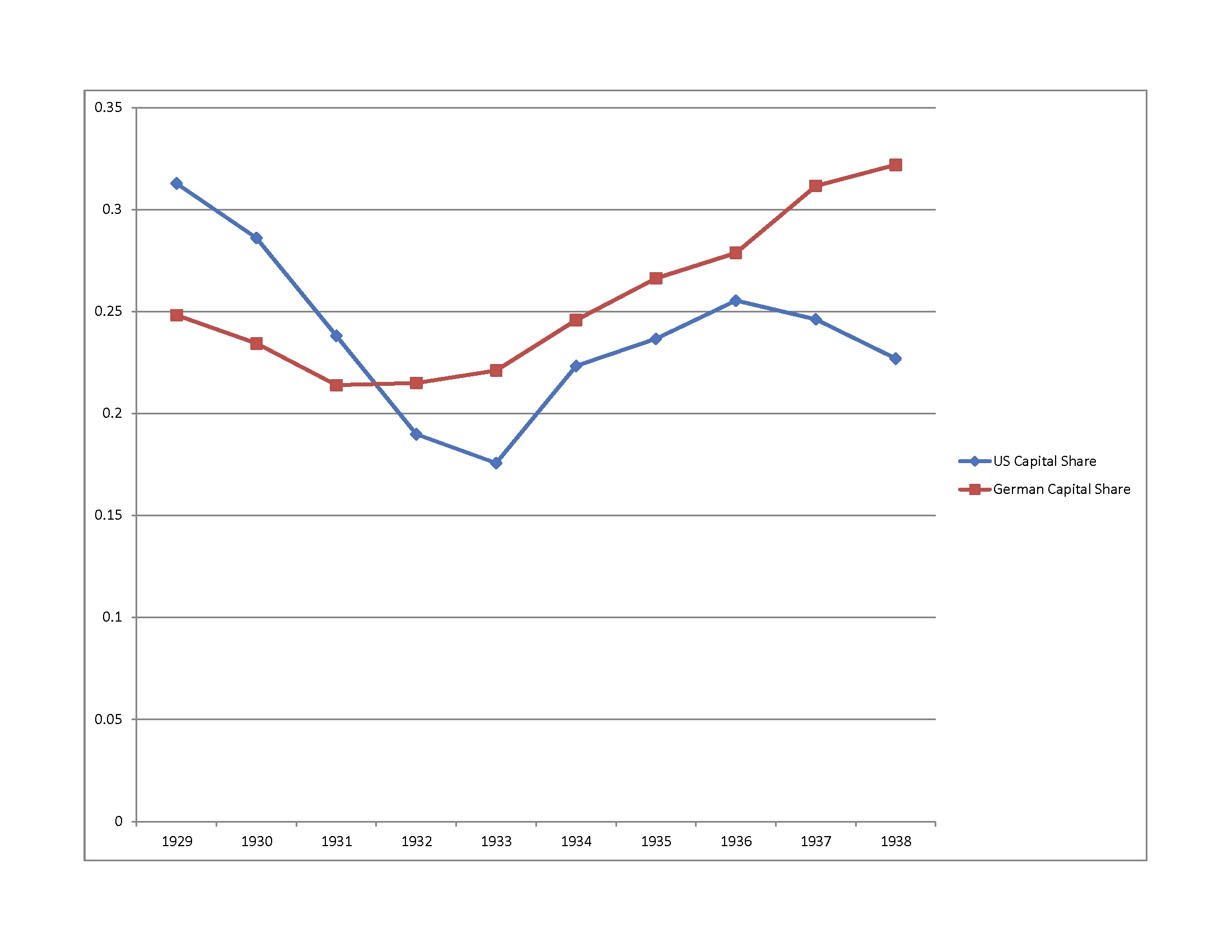 The second graph — which comes from this fascinating article by Thomas Ferguson and Hans-Joachim Voth, “Betting on Hitler: The Value of Political Connections in Nazi Germany” — tracks the stock market’s performance in Britain, US, France, and Germany, from January 1930 to November 1933. As you can see, in the early months that Hitler came to power, Germany’s stock market performance was quite strong, outstripping all the others; it’s not until July that it even crosses paths with Britain’s, the second best performer.

On Twitter, Justin Paulson brought this fascinating article from theJournal of Economic Perspectives to my attention. It’s called “The Coining of ‘Privatization’ and Germany’s National Socialist Party.” Apparently, the first use of the word “privatization” (or “reprivatization”) in English occurred in the 1930s, in the context of explaining economic policy in the Third Reich. Indeed, the English word was formulated as a translation of the German word “Reprivatisierung,” which had itself been newly minted under the Third Reich.

After I sent him this article, Phil Mirowski also sent me this piece by Germà Bell, “Against the Mainstream: Nazi Privatization in the 1930s,” from the Economic History Review. This article also has some fascinating findings. From the abstract:

In the mid-1930s, the Nazi regime transferred public ownership to the private sector. In doing so, they went against the mainstream trends in western capitalistic countries, none of which systematically reprivatized firms during the 1930s.