If you asked me to create a schematic for the health care plans proposed by Bernie Sanders, Elizabeth Warren, and Pete Buttigieg, it would probably look something like this: 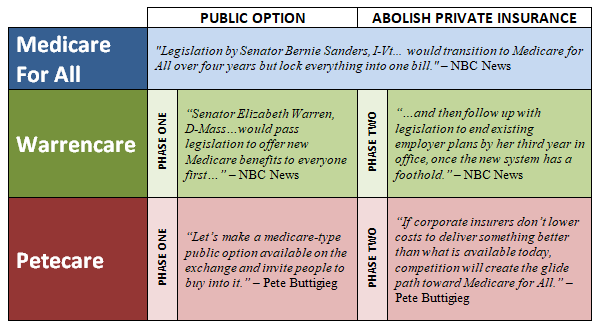 In case you missed it — Warrencare and Petecare are, as proposed, structurally identical. Both are split into two phases. In phase one of both plans, the president passes a public option. Then, in phase two of both plans, private insurance potentially goes away, though in both plans phase two is entirely contingent — in Warrencare on passing a second bill, and in Petecare on the withering away of private markets.

Medicare for All, meanwhile, has a completely different structure: it combines the public option and the abolition of private insurance into a single bill. To put it another way, Medicare for All has no contingent phase two.

Bizarrely, however, this extremely simple and intuitive approach is not how we have been talking about the candidates’ health care plans. Instead, our discourse has come to describe them essentially like this: 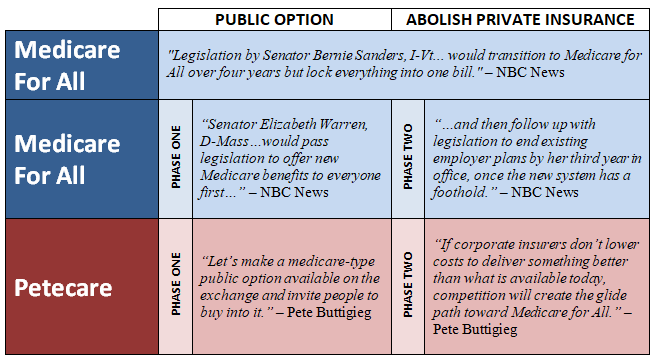 Confusingly, pundits are using the same name (Medicare for All) to refer to both Medicare for All and Warrencare. And they routinely conflate these plans (saying things like, “Sanders and Warren both support Medicare for All”), even though they are quite different. To confuse matters even more, they often talk about Petecare as if it is a markedly different plan, when in fact it is structured identically to Warren’s.

It is no mystery, of course, why we’ve ended up in this conceptual mess. For much of the past year, Elizabeth Warren insisted that she supported “Bernie’s plan,” which everyone has always described as Medicare for All. And understandably, everyone drew a sharp contrast between Medicare for All and so-called public option plans, insisting that there is a major difference between a plan that destroys private insurance and one that kicks that can down the road. But then, Warren released Warrencare — which would have been called a “public option” plan had anyone else released it — while insisting that it was still somehow Medicare for All.

Oh, and by the way — this semantic mess aligns directly with messaging that opponents of single payer have been advancing for years. Funny how that works.