Ahead of the United Nations’ COP26 conference on climate change this fall, climate activists are raising the alarm for the planet’s future. Extinction Rebellion (XR) is one group sure to have an aesthetically punchy presence — bound to be followed by the usual liberal media praise and right-wing mockery of its stunts.

XR has, in times of growth, enjoyed an impressive digital presence. Dynamic and shareable content across platforms has spread its ideas and advertised its actions. But — as I saw in my own former role as an admin on XR’s social media pages — it soon became clear from the messages coming from a minority of supporters that its politics could easily lend weight to reactionary narratives.

This was intensified by the pandemic, which brought a faster pipeline from ostensibly radical liberal tendencies that spoke of “anti-politics” and “post-politics,” to a certain comfort with nativist dogmas. In the first instance, this lack of political sharpness manifested itself in XR’s call for a “depoliticization” of the climate issue, calling for a “Citizen’s Assembly” that would supposedly take the whole problem in hand.

But, with the reduction of travel-related pollution during lockdowns, enthusiasm that “nature was healing” complemented more reactionary sentiments. XR social media suggested that borders should remain closed permanently, as a measure for solving the climate crisis. Similarly, when XR came out explicitly against socialist politics, this will have surely alienated many groups working alongside it.

From buzzwords like nonviolence and horizontalism, to campaigns that appear soft on the police and take a hard line against population growth, XR’s failings ultimately stem from one central problem: the absence of a strong class politics. To discover its radical energy, this green movement must become red — be clear about the causes of climate chaos and back just solutions to climate chaos that can mobilize the social majority.

Extinction Rebellion has suffered a long decline. While it has always relied heavily on its social media presence, this red line on the graph below shows mentions of the group’s main account on Twitter over the course of the past twelve months. 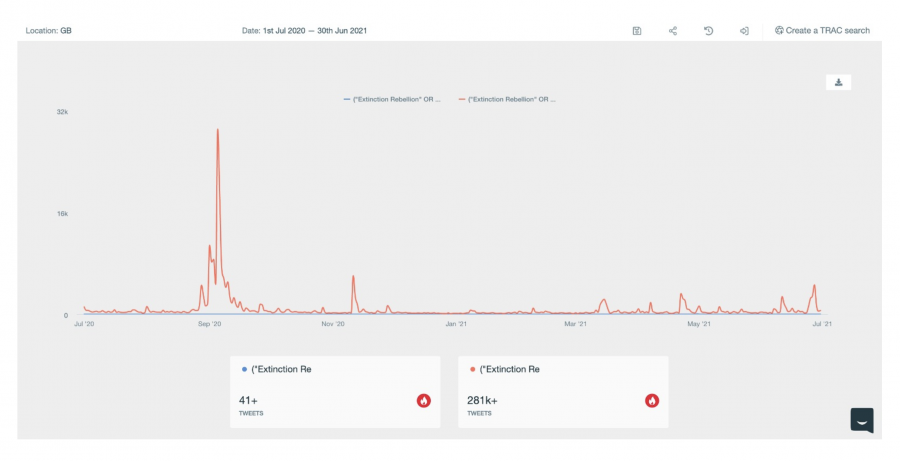 The small spike in interest in January and recent signs of life are still relatively quiet for an international movement that has repeatedly drawn mainstream media attention. But aside from those blips, XR is dead in terms of sustained relevance to political discourse — not least given the political positions it has taken.

This partly owes to the effects of the pandemic on discussions of environmental problems. For the more bourgeois sections of climate activist milieu, COVID-19 transmission made it easier to explicitly support measures against immigration and population growth.

This isn’t new. Both before and during the pandemic, British broadcaster David Attenborough has periodically intervened in mainstream media to claim that “humans have overrun the planet.” An October 2020 study by Jarrow Insights showed that the most popular online pages featuring Attenborough are articles where he is quoted as highlighting population growth as the central cause of climate catastrophe.

Attenborough is also a key patron of Population Matters, a think tank which aims to combat human population growth. In its original incarnation as the Optimum Population Trust it advocated “zero migration in the UK” — as if migration to the UK is the issue that will determine the fate of humanity. The lack of an anti-imperialist analysis of the factors driving migration is, however, endemic to climate groups, from generally liberal movements like XR to the more obviously reactionary think tanks like Population Matters.

These population-cutting narratives are, indeed, common in XR’s campaigning. Take, for example, this video posted on XR’s UK Twitter account in May. It promotes a #RebellionOfOne, advocating for young women to commit to giving up plans for starting a family — that is, saving the planet by not having children. “I’m taking up a rebellion of one because I’m grieving for children that I did not conceive,” the activist summarizes.

XR is fundamentally driven not by collective solidarity but by a politics of individualized sorrow and bad feeling. Instead of offering an alternative to capitalist atomization, XR reflects it back onto itself. The bourgeois climate movement is, to recycle Karl Marx’s line on religion, a “sigh of the oppressed creature”; albeit a sense of oppression mostly worked up by middle-class liberals from core capitalist nations.

Predictably, XR’s media wing has facilitated those narratives, as activists share Guardian articles parroting think tank advocates for population decline. Yet, a 2015 briefing by such a mainstream institution as Oxfam found that the “poorest half of the global population are responsible for only around 10% of global emissions yet live overwhelmingly in the countries most vulnerable to climate change — while the richest 10% of people in the world are responsible for around 50% of global emissions.”

Groups like XR are keener to focus on anti-human myths than on the root cause of the climate problem; namely, capitalism’s necessity for infinite growth, production, and exploitation on a finite planet. Jeff Bezos and Elon Musk escaping to space is a clear opportunity to show where capitalist climate destruction leaves the elite, while workers toil in a burning planet.

An honest recognition of capitalism’s centrality as the agent of climate destruction would lead to the understanding that we should either abolish it or expect extinction, rather than rely on “pragmatic” tinkering that stands “above politics.” Instead, XR offers a naive liberal utopianism, dismissing socialism out of hand while relying on short-termist fixes like the Climate and Ecological Emergency Bill. It is in critical danger of reducing environmentalism to ineffective moral protest. 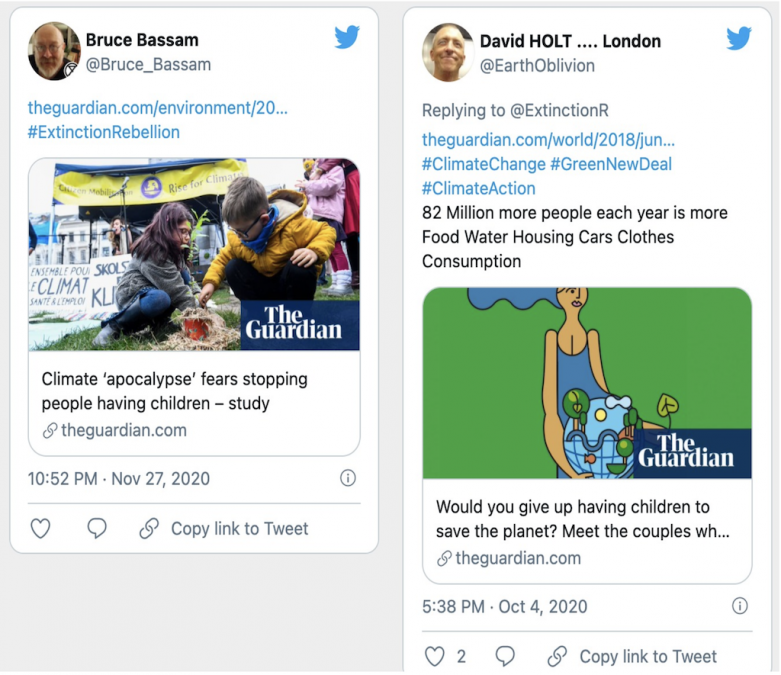 This is, ultimately, the cost of having a politics irrelevant to the most oppressed victims of the climate and class struggle, from London to the Global South. Tellingly, the graphs that depict Extinction Rebellion’s online traction, or lack thereof, have gathered data from a period of twelve months in which Black Lives Matter and criminal justice campaigns have been at the forefront of left-wing organizing.

In the UK, arguably the central struggle of the summer has been to “Kill the Bill,” i.e. stop the Tory legislation that would hand police powers to target and criminalize protests that cause “annoyance.” The campaign has brought together trade unions, migrant rights groups, GRT (gypsy, Roma, and traveler) activists, sex workers, and even Extinction Rebellion supporters. However, in the absence of a class-based analysis that puts the Police, Crime, Sentencing, and Courts Bill in the wider context of neoliberal authoritarianism, fully coherent with the SpyCops Bill and anti-migrant Hostile Environment, XR has been timid once again. The group even attempted to rename the campaign to Kill the Act, in order to escape from accusations of supporting police abolition. Any such accusation would surely have rung hollow anyway, given XR’s own tendency for police cooperation.

XR posters instructing activists to peacefully get arrested as a display of nonviolent resistance have led to speculation about XR being an “op” — a covert police operation mimicking a progressive movement in order to root out activists. While one might doubt that this is literally true, the real question is whether anything would be different if it was. If XR’s actions are so blatantly counterproductive, then something deeper is clearly wrong with its approach.

Activism whose strategy centers on performatively being put in handcuffs may be OK for some white middle-class people who don’t have to worry too much if they get arrested. But effective campaign strategies ought to aim higher. That would mean conscious working-class mobilization that recognizes the brutality of capitalism and its destruction of the climate, rather than wasting valuable crowdfund money subsidizing activists on a conveyor belt to the court system. 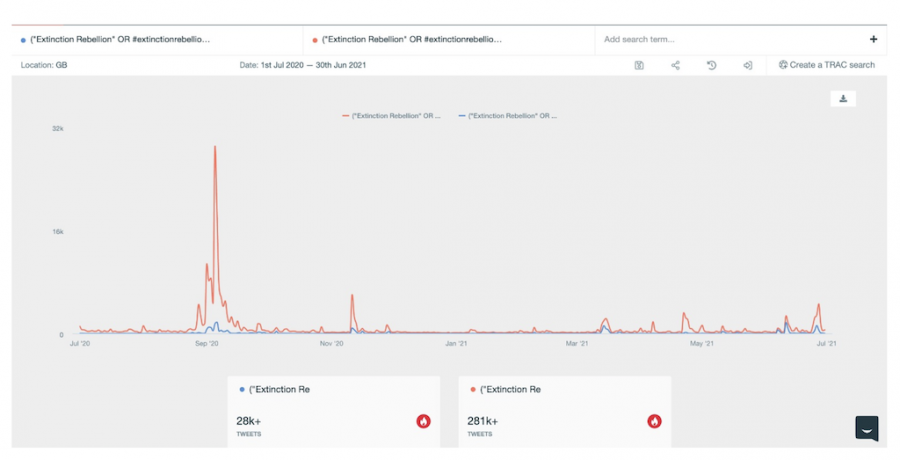 In fact, discussion of XR’s relationship with the police has become toxic for its image more broadly. Nolan MacGregor, director of strategy at Jarrow Insights, said that policing “makes up a much larger share of XR-related discourse, and spikes pretty consistently whenever people are talking about XR,” adding that the organization’s “relationship with the police is one of the defining features of XR discourse.”

MacGregor suggests that “most of the posts mentioning XR and the police are not supportive of XR,” and that “most of the time XR and police were mentioned together, it was to criticise XR.” Their activists “almost never liked to talk about it,” according to the social media data specialist.

For MacGregor, the graph shows that “every time people start talking about XR, they start arguing about the cops. This is part of the reason why XR has lost steam. The critique of its relationship with the police has really caught on, especially since a lot of the people XR tries to appeal to — middle-class young people — have been paying very close attention to Black Lives Matter.”

He says their research on XR has revealed that “they have not had a single moment where they escaped that criticism.” 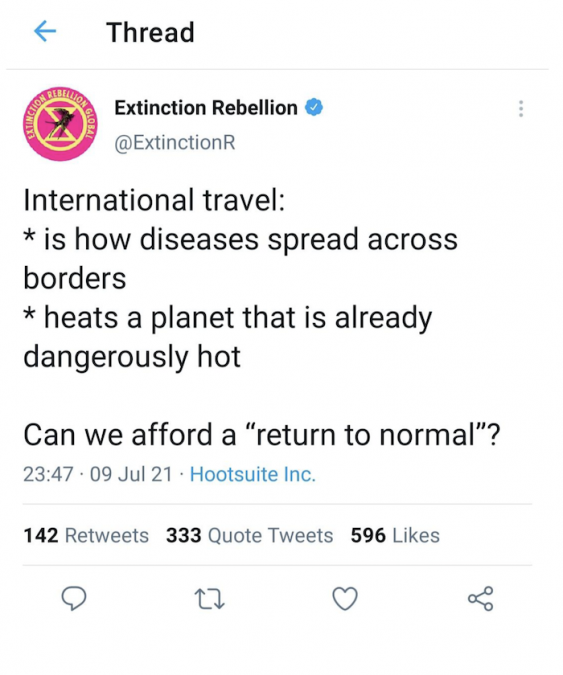 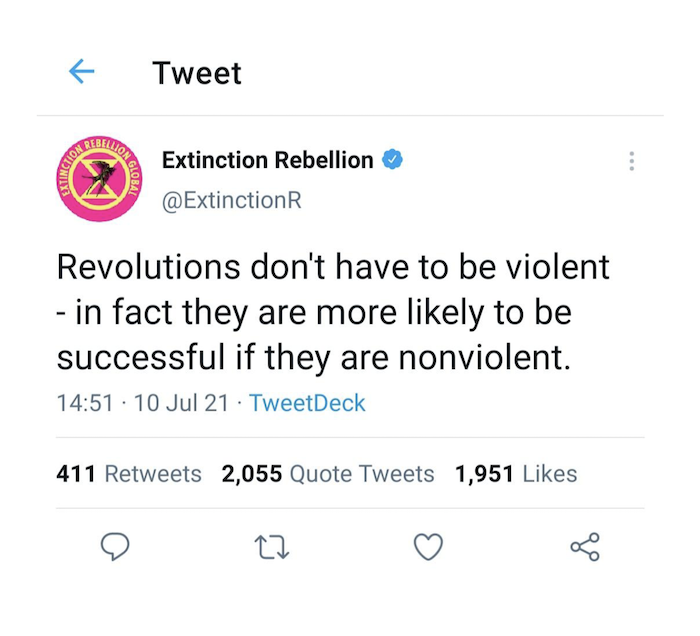 Further tweets from recent weeks — now deleted — have further weakened any hope of XR proving strong anti-imperialist credentials, or even being able to speak beyond its existing bubble. Migrant workers who have moved to London in response to often US-backed war and terror are hardly going to find much in common with such patronizing messaging. Dog-whistling migrants as a factor for “disease” and nonviolent activism as a “revolutionary” strategy is not just insulting, but factually incorrect.

In the preface to Frantz Fanon’s The Wretched of the Earth, Jean-Paul Sartre implores the reader to “get this into your head — if violence were only a thing of the future, if exploitation and oppression never existed on earth, perhaps displays of nonviolence might relieve the conflict. But if the entire regime, even your nonviolent thoughts, is governed by a thousand-year-old oppression, your passiveness serves no other purpose but to put you on the side of the oppressors.”

As mainstream media cover the run-up to COP26, groups like XR must get it into their heads. Our wretched Earth needs class and climate organizing, not a funnel into prison for young activists. The next popular climate movement can only avoid a slow death if its politics are as red as they are green.