Last week’s employment situation report showed that employer payrolls increased by 266,000 people on a seasonally adjusted basis. This number was lower than many people expected, and, in response, many pundits began calling for cuts to unemployment benefits on the theory that they are to blame for the lackluster payroll growth.

As I indicated last week, these pundit conclusions don’t actually follow from this data. The question of whether, and by how much, unemployment benefits are reducing the number of people willing to accept work is a question of employment flows, not employment levels.

Net job growth can be lower than expected because fewer out-of-work people are taking jobs or because more in-work people are losing jobs. But only the former may indicate that unemployment benefits are reducing the number of people willing to accept work, and, when we look only at that figure, we see that the number of people who newly found employment actually went up from 6.464 million in March to 6.9 million in April. The lackluster net job growth in April was driven not by people staying on unemployment but rather women leaving their jobs and exiting the labor force altogether. 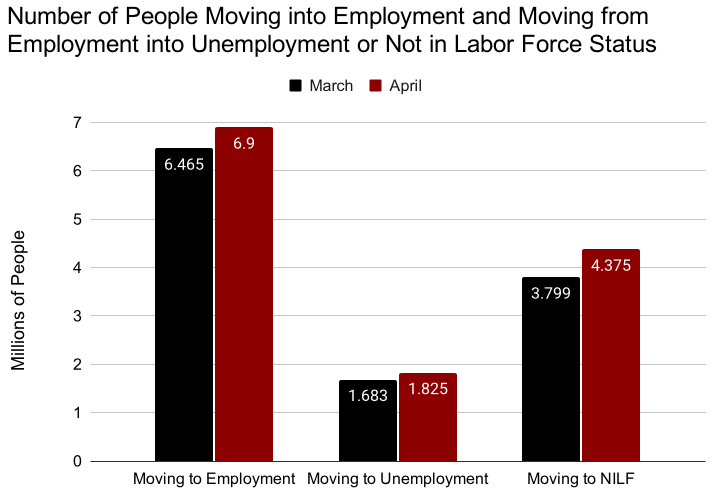 The prior graph comes from the Current Population Survey, which asks households directly about their labor market situation over the last month. This is a better source of data than the payrolls data that most pundits have been relying upon because this data can actually track labor flows not just net changes in employment levels.

But there is an even better source of data on unemployment benefits: the weekly unemployment insurance (UI) report put out by the Department of Labor. Using the two UI reports (I, II) that align with the April time period of the last jobs report, we can see that the unemployment rolls shrank over this period by 245,000 people, which is a net figure, meaning the number of people who individually left the rolls was higher than that. We also see that new claims for unemployment insurance declined by 111,000. 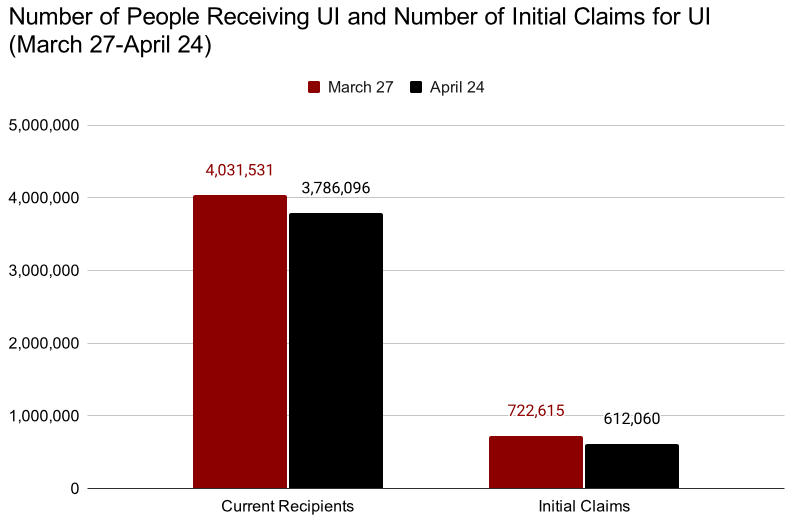 Finally, it is worth remembering that not all people who are out of work are even on unemployment benefits. As indicated in the graph above, in late April, there were 3.8 million people on unemployment benefits. In that same month, there were 151.1 million employed people, which was equal to an employment rate of 57.9 percent. Prior to the recession, the employment rate peaked at 61.1 percent. If that rate obtained last month, the total number of employed people would have been 8.4 million people higher at 159.5 million people. 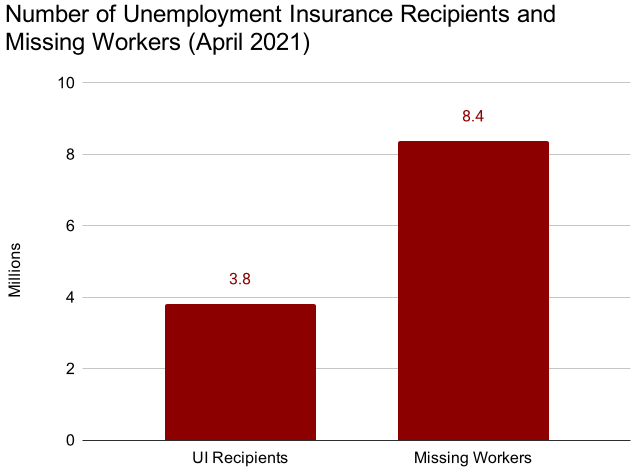 With this all said, I think it is important as this debate develops over the next few months to remain clear about what is meant by the phrase “full employment,” as it will no doubt be misleadingly seized upon by advocates of welfare cuts.

In a second meaning of the term, “full employment” refers to a labor market situation where employers have a hard time finding people to hire. This is what Michal Kalecki meant by the term in his canonical text “The Political Aspects of Full Employment.”

The maintenance of full employment would cause social and political changes which would give a new impetus to the opposition of the business leaders. Indeed, under a regime of permanent full employment, the “sack” would cease to play its role as a disciplinary measure. The social position of the boss would be undermined, and the self-assurance and class-consciousness of the working class would grow. Strikes for wage increases and improvements in conditions of work would create political tension.

One reason why employers might have a hard time finding people to hire is because they are already in a job. But another reason is that they are subsisting on nonlabor incomes (capital income, old-age pensions, disability pensions, unemployment insurance, etc.) and would rather do that than take the job that the employer is trying to fill under the terms the employer is offering.

In this meaning of the term, cutting unemployment benefits in order to push people into accepting work brings the country further away from full employment. It increases labor supply, makes it easier for employers to fill vacancies, and makes it easier for employers to fire people and threaten to fire people. It increases the power of bosses while decreasing the power of workers.

It is this latter worker-power-focused approach to full employment that the Left has been historically interested in and that the Left should continue to push in the coming year. Workers choosing to hold out while they have decent income to support them is not the same thing as a worker with little to no income searching in vain to find a job. Both show up as lower employment, but the former is generally good while the latter is generally bad.

Where precisely to set the parameters of an unemployment benefit system is not something that can be derived totally abstractly from ideologies and theories. You want a benefit that cushions everyone when they lose a job and provides them ample time and opportunity to look for work that they think is suitable. But you also want most people moving off the rolls after a while, and you don’t want the rolls to be so big that it is really putting a damper on crucial production that people need to live.

When looking at the unemployment rolls as they currently stand, it is hard to see why anyone would be especially alarmed by them. Benefit levels are decent and people do have a decent amount of time (I’d say too little) to look for work they think is suitable. People are moving off the rolls in significant numbers and the rolls are really not that large in the grand scheme of the economy. The 3.8 million people currently on UI represent 2.3 percent of the labor force and 1.2 percent of the population.