This spring, states pitched the Trump administration on an innovative jobs proposal: use federal stimulus funds to hire thousands of unemployed fossil fuel workers to plug oil and gas wells leaking emissions that are intensifying the climate crisis. Instead, the Trump White House funneled nearly $100 billion in bailouts to oil and gas corporations through the Federal Reserve.

That move enriched fossil fuel industry executives and investors who have been among Trump’s big boosters, but it has left a huge problem: state governments could now be on the hook for up to a quarter trillion dollars to plug methane-leaking wells that fossil fuel corporations have abandoned, according to a new report.

The $280 billion price tag is the estimated cost of plugging onshore wells and remediating the surrounding land after they are no longer in operation, according to the study released today by Carbon Tracker, a think tank that documents the impact of the energy transition on capital markets.

States from Colorado to Louisiana to Ohio are being warned that the costs of cleanup could be enormous. State governments cannot run deficits — so those costs would have to be paid either by raising taxes or slashing government programs.

“For a long time, those liabilities were far off in the future,” study coauthor Robert Schuwerk told the Daily Poster. The thinking was, “the industry is going strong, it’s going to get bigger, as the world grows, we’ll need more oil.” So regulators and industry leaders agreed, “let’s just accept that we’ll let these liabilities be settled by these companies’ future cash flows, and we’re comfortable enough that we are going to have that.”

The problem now, Schuwerk says, is that the oil and gas industry is in decline, and oil companies aren’t going to be able to afford the cost of remediation.

Moreover, regulators and oil companies are severely underestimating the cost of cleaning up the wells those corporations profited from. Industry and regulatory projections put the cost of cleanup at $30,000 per well, but Carbon Tracker has previously found that plugging many wells would cost closer to $300,000.

Millions of Wells Must Be Plugged to Combat Climate Change 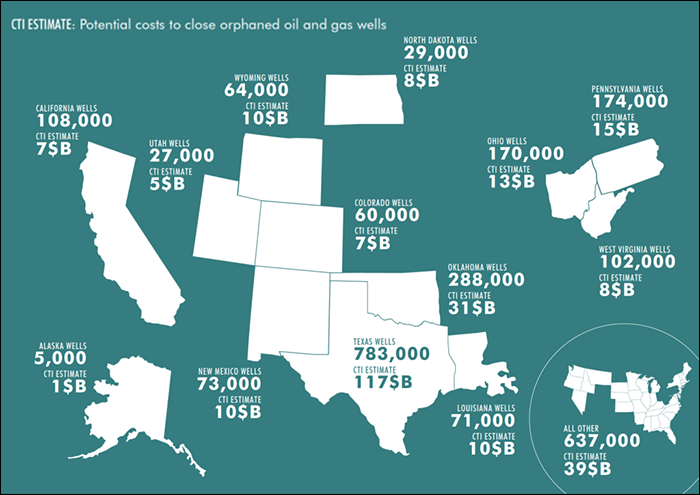 Climate scientists are only beginning to understand the extent of the methane leaks from these abandoned wells.

According to the Environmental Protection Agency’s (EPA) projections, abandoned oil and gas wells, or improperly plugged wells, emit enough methane each year to cause the climate damage equivalent of one day of US oil consumption. It is possible that the abandoned wells emit three times that amount, according to the EPA, because the projections were based on incomplete data.

Oil and gas companies are, by law, on the hook for these obligations — they are required to “plug and abandon” their wells once they are no longer in use. However, when companies file bankruptcy, this cleanup responsibility falls to creditors or state governments — even though fossil fuel companies had previously banked big profits off the wells.

For many years, the oil industry has heavily discounted the costs of plugging wells, assuming most of those expenses will be incurred far into the future. And even for these lowball estimates, state governments have only required oil and gas companies to cover, on average, 1 percent of their liabilities through surety bonds.

But the new Carbon Tracker report finds that these loose regulations and low estimates could cost taxpayers hundreds of billions of dollars.

This is already happening. In Colorado, oil and gas company PetroShare Corporation filed for bankruptcy with nearly $16 million in cost liabilities for reclamation for its oil wells. But the state of Colorado had only required PetroShare to set aside $400,000 for reclamation costs.

Last month, the state reached a settlement that allowed PetroShare’s creditors to leave the orphaned wells to the state without paying the reclamation costs. In other words, taxpayers are on the hook for at least $16 million in cleanup costs since PetroShare declared bankruptcy.