My post on contingent and “alternative” work annoyed some people who think the Bureau of Labor Statistics (BLS), the source of the data, is missing the point through bad definitions and bad techniques. (As am I, for using it.) According to these critics, asking people whether they expect their jobs to last the year is using the wrong definition of contingency — though it’s not clear what the right one is, since most employed people in the US can be fired for no reason at all at any time.

Or the BLS was wrong to focus only on the primary job; plenty of people do gig work on the side to supplement their incomes, so the Bureau is — perhaps intentionally! — lowballing the numbers.

Yes, though we don’t know how many such people there are (though we’ll know more when the BLS releases its data on “individuals who found short tasks or jobs through a mobile app or website and were paid through the same app or website” on September 30). But the side hustle is a different story from the canonical gig economy line, which is that we’re all day laborers now.

Or, best criticism of all, the numbers are just wrong because they don’t comport with my correspondents’ experience. But you don’t know how representative your experience is, do you?

Here are some stats to address these counterclaims.

The gig economy story is closely related to the idea that the permanent job is a thing of the past — we all bounce from job to job now. That perception is not confirmed by the BLS’s job tenure numbers, which report the median number of years people have been in their current position. Here’s what those look like, broken down by sex. 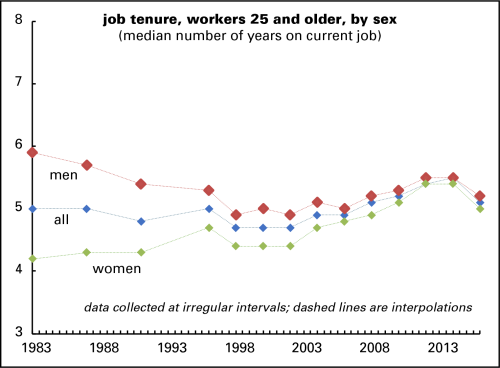 Median tenure has bounced around some, but the lines are surprisingly trend-less given the chatter about increased volatility. Tenure overall barely changed between 1998 and 2016; it fell by about a year through the 1980s and 1990s and rose since; it was about one month longer in 2016 than it was in 1983. That average does obscure some gender differences. Tenure for men fell by a year between 1983 and 1998, rose by half a year through 2014, and then fell a bit between then and 2016, to a level about eight months shorter than in 1983. Tenure for women, however, has been rising fairly steadily; it rose about ten months between 1983 and 2016.

There’s not all that much change in tenure by age or industry either. For younger workers, those between twenty-five and thirty-four, tenure fell by three to four months between 1983 and 2016, with not much variation in the intervening years. By industry, tenure rose by two years between 1983 and 2016 in construction, fell by a month or two in manufacturing, and has risen across most intervals in retail trade and finance. Tenure in government was up by nearly two years between 1983 and 2016. Of course 1983 was not 1963, the Golden Age before everything reportedly went haywire in the 1970s. But 1983 was very early in the neoliberal era, so we should expect to see more of a change than we have.

Another counter to the job-churning story: turnover now is lower now than it was in the early 1990s. The monthly employment numbers — like “employers added 223,000 jobs in May” — are net figures, and are the difference between many gross job gains and losses. At current rates, that 223,000 figure probably results from something like 2.5 million gross gains, from new and existing employers, and 2.3 million losses, from shrinking firms or ones that go under. (We won’t know the actual numbers for many months yet — these are just guesses from recent trends.) Add the gross gains and losses together, and you get figures on gross turnover — almost 5 million jobs come and go in a typical month lately.

Here’s what those gross numbers look like (translated into percentages of employment to make them comparable over time). All are down considerably from the 1990s. The trendline in the turnover graph heads steadily down; the r2 figure of 0.92 means that the trend alone explains 92% of the movement in the series. That’s not to say time is causing the downtrend; it is to say it’s very well-established. 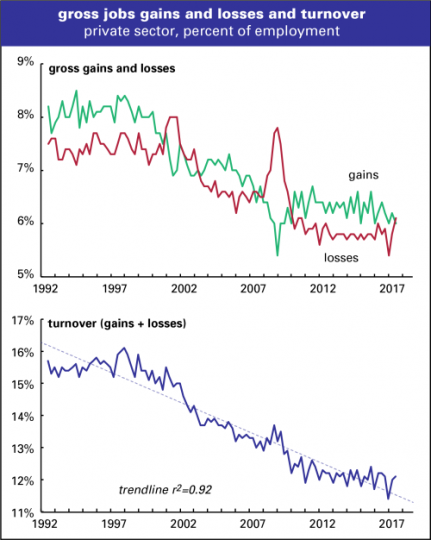 Another claim: we’re all juggling multiple part-time jobs, or working short hours because full-time employment isn’t available. There has been little change in the share of part-time employment in the total since the early 1980s. It was around 17% of the total in 1980, and is around 17% today. Part-time employment comes in two measures: noneconomic or voluntary (people who prefer part-time work), and economic or involuntary (people who want full-time work but can’t find it). Noneconomic is essentially trendless since 1975. Economic is highly cyclical, rising in recessions and falling in expansions. It’s now at or below the lows of the late 1970s and late 1980s. It’s slightly above where it was in 2000, a serious boom year. (There were definitional and technical changes in the survey on which these numbers are based in 1994; they took the economic share down by 1.1. Instead of inferring whether part-time workers wanted full-time, as had been the case earlier, surveyors began explicitly asking if respondents want full-time work, a not-unfair question but one that yields smaller numbers. There have been no significant changes in the survey since then.) 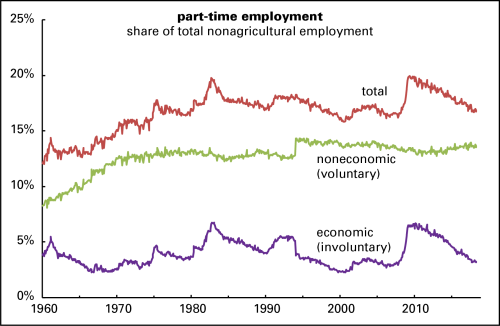 Ok, maybe gig work isn’t the norm, but lots of people are doing it on the side, right? Maybe, but you’d have to find some fresh numbers to support that case. Here’s the share of multiple jobholders. It declined from 1998 through 2011 and has been flat since. Lately, less than 5% of the employed have been working more than one job. We’ve only got twenty-four years of this data, so it’s hard to make generalizations about it, but it looks like multiple jobholding rises early in an expansion and falls later as the labor market tightens. 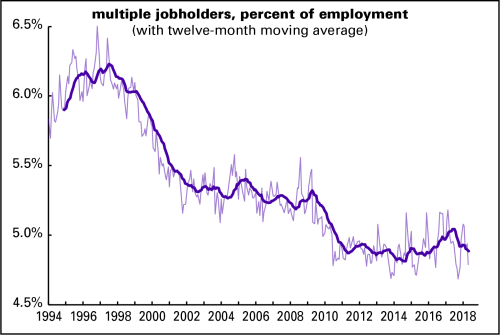 There has been no uptrend in temp employment in almost twenty years. There was a sustained rise from when the stats on temporary help firms (then called “help supply” in BLS argot) begin 1982 through 1998, but the trend has been flat since. Temp employment fell sharply in the Great Recession, and somewhat less in the early 2000s downturn, and rose after both to the 2% neighborhood. Temp firms accounted for 2% of employment in May 2018, exactly what they did in October 1999. 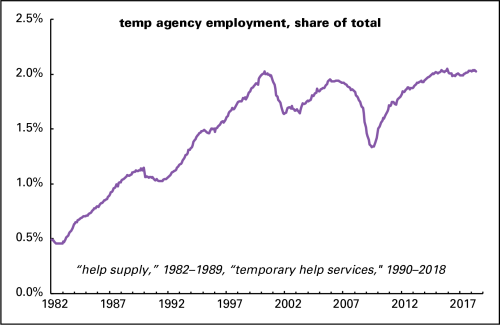 If a growing horde of us were 1099ers (disclosure alert: I’m one), then you might think the count of the self-employed would reflect it. But they’re not showing up in the BLS’s monthly employment numbers (which they compile by asking sixty thousand people lots of questions every month). Self-employment has been declining as a share of the total for almost seventy years, with the exception of a mild rise in the 1970s and 1980s. Yes, this is also about people’s main job; there may be more freelancing to pick up extra cash. But these numbers offer no support for claims that the traditional job is disappearing. 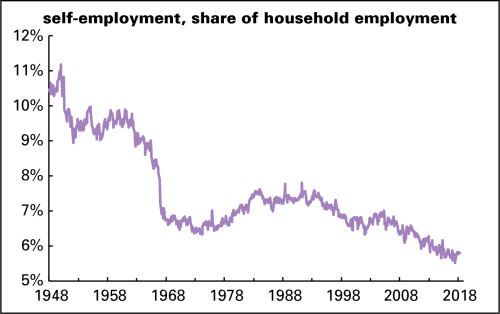 The State of the Working Class

The folk wisdom exaggerates the prevalence of contingent and temporary work, but that doesn’t mean the working class is living in ease and comfort. It’s not.

For evidence we can turn to a very orthodox source — the Federal Reserve’s survey of economic wellbeing (and data appendix). A third of respondents, 33%, report themselves “living comfortably”; 40% are “doing okay,” 19% are “just getting by,” and 7% are “finding it difficult to get by.” Given people’s predilections toward giving upbeat answers, these are not impressive figures. Just 42% “always” or “often” have money left over at the end of the month. Almost half — 47% — owe money on their credit cards; 29% report their credit card debt growing, and only 20% have paid any of it off. Over half, 51%, always or frequently make only the minimum payment. Almost a quarter, 22%, wouldn’t be able to pay their bills in the month the survey was taken. (There are large demographic disparities in that count: 25% of whites with a high school degree or less fall into that category — not all that much more than the 21% of blacks with bachelor’s degrees or more. See graphic below.) Half have less than $100,000 saved for retirement; 20%, less than $10,000. Almost one in ten, 9%, received food stamps in the previous year. Well over half, 57%, could not cover their regular living expenses should they lose their job with saving or even borrowing. Half couldn’t cover an emergency expense of $400 without borrowing or selling something. One in ten had to forego a doctor visit or skip on prescription drugs because they lacked the money; one in five skipped visits to the dentist. All together, about a quarter skipped some form of medical care because they couldn’t pay. Over a third, 37%, have some form of lingering medical debt that wasn’t covered by insurance. 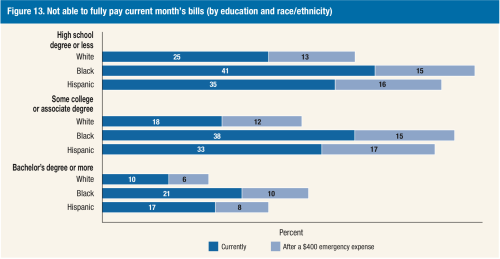 The Fed assembled responses into measures of financial wellbeing. They found that 42% of Americans have a “high likelihood of material hardship”: 38% of whites, 46% of blacks, and 52% of Hispanics/Latinos.

While most of these measures have improved over the last few years as the Great Recession recedes into the past, they’re still awfully high. And because most people have so little in the way of savings, and because our welfare state is so brutally minimal, even a modest shock like an illness or a temporary spate of unemployment can throw people who thought they were solidly middle-income into penury and despair. (A striking example: in the 1970s, about two-thirds of the unemployed were collecting unemployment insurance benefits, a minimal standard of decency; that’s now down to about a third.) And this doesn’t even address the level of stress — visible in soaring antidepressant and opioid use and sagging life expectancy — that the increased competitiveness of the neoliberal era routinely produces, even among the employed.

So while the gig economy is mostly a fantasy produced by publicists (and leftists who take the publicity too seriously), there’s plenty of entirely preventable economic misery around.