Rémi Lefebvre is professor of political science at the University of Lille 2 and a researcher at the Center for Administrative, Political, and Social Research and Studies (CERAPS). He has written extensively on the Socialist Party and the French political system, and is the author of the Les Primaires Socialistes, la Fin du Parti Militant (Raisons d'Agir, Paris, 2011). 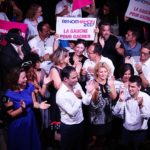 Center-Left in No Man’s Land

The difficulties facing Benoît Hamon’s campaign reveal a French Socialist Party being outflanked on its right and left.