Six academics, including Arin Dube and Suresh Naidu, released a paper last week estimating the impact of the massive unemployment benefit cuts that occurred in twenty-two states in June. The team was able to use bank transaction data and comparisons to unemployment benefit recipients in states that did not cut benefits to get precise estimates of both the employment and income effects of the policy change.

Overall, individuals subject to benefit cuts had only slightly higher employment rates than individuals who were not subject to cuts but had massively lower incomes.

The researchers focused on a cohort of UI recipients who were receiving benefits in April of this year. They found that states that cut unemployment benefits (Withdrawal States) saw a 46 percent reduction in benefit recipiency among this group relative to states that did not cut those benefits (Retain States). 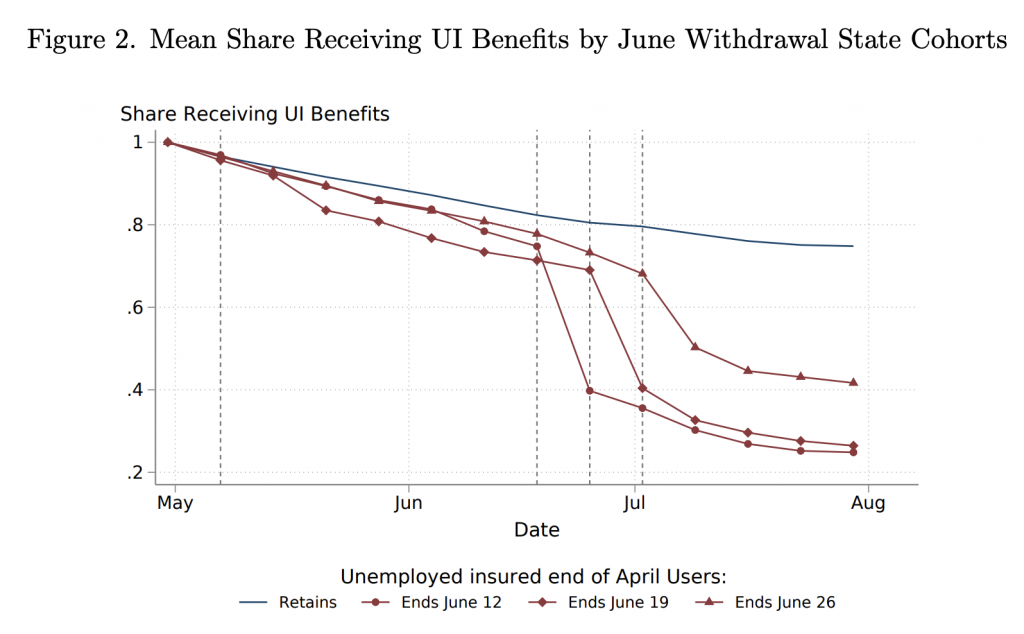 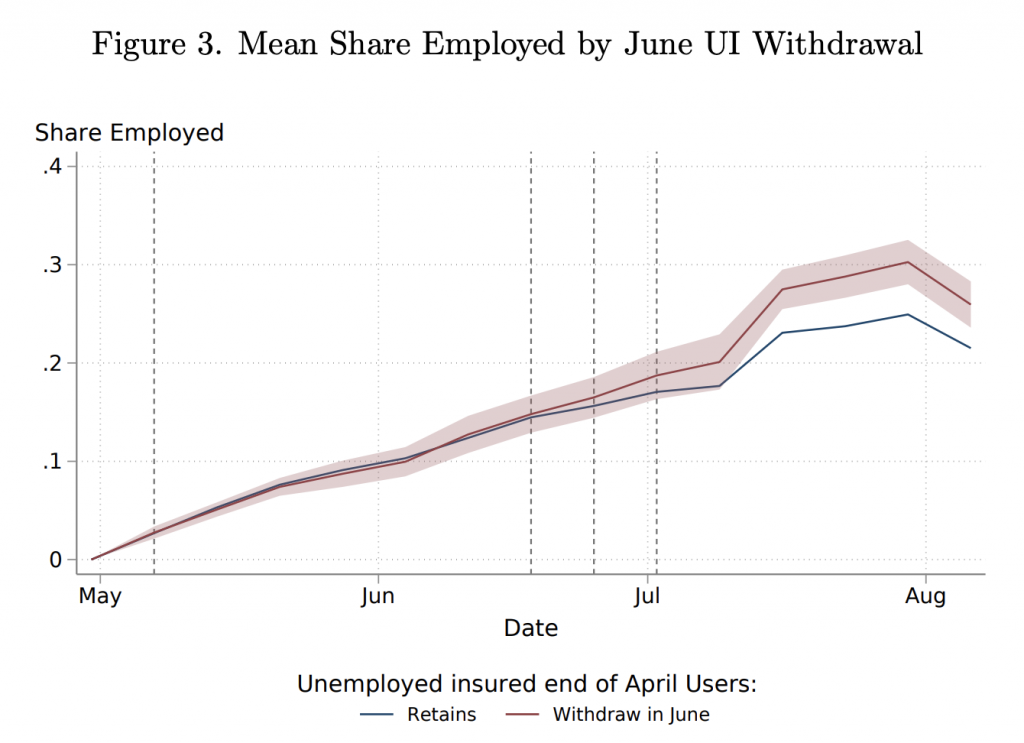 It’s important to underscore here that these figures represent employment differences among the cohort of people who were unemployed at the end of April. This is different from analyzing overall employment differences among the labor force in each state. Some or all of the 4.4 percentage points of extra people who got a job in the Withdrawal States may have done so at the expense of other job seekers, making the net effect on overall employment even lower than this figure suggests.

Cutting unemployment benefits in this way has two countervailing income effects. It directly reduces income from UI benefits while indirectly increasing income from the earnings of those who obtain employment as a result of the cut. The researchers estimate that earnings rose among the Withdrawal cohort by an average of $14 per week while benefits declined by $278 per week. Thus, the net income change was a decline of $264 per week, or $13,728 on an annualized basis.

Spending also decreased by $145 per week ($7,540 annually) in the Withdrawal cohort relative to the Retain cohort. This reduction in consumer spending will of course make it harder for businesses to hire people.

So far, only 26 states have implemented these steep benefit cuts and those states are generally less populous than the states that have not implemented the cuts. But the pandemic UI benefits will expire in all states on September 6 unless Congress acts.

Yesterday, President Biden sent a letter to Congress saying that he believes it is appropriate to allow these benefits to expire on September 6, but this and other research clearly shows that it is not appropriate, at least if your goal is to avoid needless economic devastation that dramatically cuts income and consumer spending while having virtually no impact on employment.

At the start of the pandemic, 152.5 million people were employed. That number is currently 146.8 million people. If employment continues to increase at around 900,000 per month, the gap between current employment and pre-pandemic employment will be closed in 6 months. Cutting off benefits now is clearly premature and almost certainly counterproductive to the macroeconomic recovery.