The image of a frigid old socialist hunched in a folding chair, wearing brown and white patterned mittens and not looking particularly happy to be there, spread at warp speed across the internet seconds after it was captured at Joe Biden’s January 20 inauguration. Within hours, hundreds of thousands of photoshopped versions of the image saturated newsfeeds and timelines, making it near impossible to scroll through any social media platform without seeing Bernie Sanders and his mittens.

Bernie showed up in famous movie scenes and iconic historical moments, alongside A-list celebrities and pop cultural ephemera. An entire genre of art historical works that include Vermont’s junior senator have now sprung up. For days, the zeitgeist was fixated on Cold Bernie. 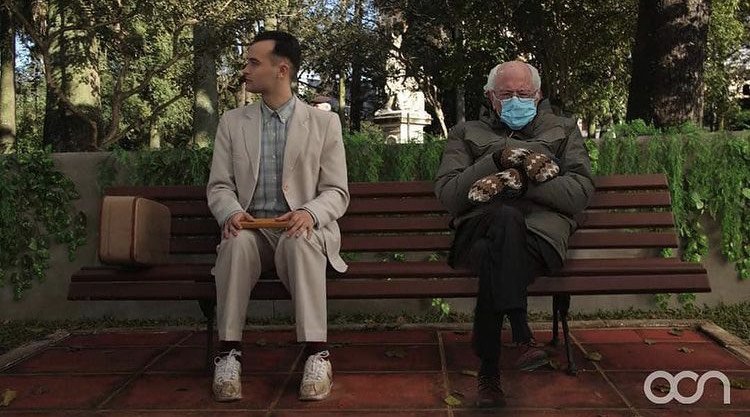 Despite its popularity, this is not the first political meme to achieve such saturation in recent political history. Just four years ago, a very different image exploded onto our screens: the punching of neo-Nazi Richard Spencer by an anonymous anti-fascist protester on the streets of Washington, DC outside of Donald Trump’s inauguration.

Much like the Bernie mittens meme, the video and still images of Spencer’s punching were ubiquitous. Within days, millions of people had watched the white nationalist get socked in the face as he showed off his co-opted “Pepe the Frog” pin to an Australian television interviewer.

Spencer, who claims to have coined the term “alt-right,” treated the inauguration as a victory lap for his brand of Third Reich–inspired reactionary politics aimed at creating a white ethno state. Media outlets from the Atlantic to Mother Jones profiled Spencer in the months leading up to the punch, providing a massive platform for his racist views. He reveled in the attention and boasted about his movement populated by memelords advancing their politics through trolling, inspired by a “Dark Enlightenment” philosophy built upon white grievance.

Spencer came to represent the larger white nationalist current in American politics that saw itself as ascendant alongside Trump. So when Spencer got clocked, a lot of people were very happy to watch it happen — and then watch it again, and again, and again. Spencer had attempted to project strength and power to show the superiority of white male chauvinism and the growing movement he represented. Instead, he — and by extension, his movement — were humiliated in public.

Video of @RichardBSpencer getting punched in the face with Celine Dion's "My Heart Will Go On" in the background pic.twitter.com/JOOI5b6Fn4

The meme was a brief bit of comic relief in a moment of crisis and fear over the future of American democracy. Trump rode into office on a noxiously reactionary politics that promised to enshrine corporate power while targeting immigrants and other communities of color, refugees, and the poor and working class. In office, Trump attempted to make good on these promises but often failed, through a combination of his own incompetence, the fact that his ideas actually were not popular, and the pushback he was constantly met with, including by masses of people in the streets opposing him.

Today, many of those same people who protested Trump are now sharing memes of Bernie Sanders sitting masked and socially distanced at President Biden’s inauguration. At the heart of the Bernie meme is the feeling felt by so many on the broad left: a great relief that Trump is out of the White House, but a lack of excitement about the warmed-over neoliberal Democrat who displaced him.

So at a pageant-like inauguration, characterized by participants like Lady Gaga sporting an enormous golden dove brooch that looked like something out of The Hunger Games, it was refreshing to see Sanders wearing a Burton snowboard jacket given to him by his son and mittens made by a Vermont teacher, looking as if he didn’t feel much like celebrating when millions of Americans are out of work and a deadly virus ravages the country. Sanders’s pose communicated a rejection of the political class’s self-congratulations. In a single pose, Bernie seemed to take a look at Joe Biden and say to the world, “Yeah, good. Ok.” It was relatable.

Tens of millions of Americans are facing hunger, eviction, and foreclosure. Inequality continues to soar as the rich profit lavishly off of the pandemic. With a lack of free, publicly provided health care plaguing working people, the case has never been stronger for Medicare for All. The same goes for a Green New Deal, to put people to work building renewable energy and green infrastructure; student debt cancellation, to relieve millions from crushing debt obligations; monthly direct payments to help working people survive the COVID-19 crisis; and a break of the corporate stranglehold over our politics.

Yet the candidate who ran on this transformative agenda was not sworn in on January 20 — instead, he was sitting alone in mittens, ready for the whole thing to be over with so he could get to work taking on the billionaire class.

The threat represented by Richard Spencer wasn’t vanquished with his being punched. As we saw on January 6, the far right that Trump helped stoke isn’t gone. Yet it’s also clear that the pro-Trump hordes and white nationalist hucksters represent a minoritarian fringe. Far from being ascendant, they are now marginalized. Meanwhile, Bernie Sanders is the new chairman of the Senate Budget Committee, and, with both houses of Congress in Democratic control and Biden as president, he plans to be “aggressive” in pushing through a progressive agenda.

As the Nazi-punching meme began to spread across the internet in early 2017, Richard Spencer fretted about its potential impact: “I’m afraid this is going to become the meme to end all memes.” But it turns out it was just the meme that ended Spencer’s own disgusting career. Bernie, however, is still blowing up.