Our new issue – looking at what the Bernie campaigns accomplished – is out this week. Subscribe in print today!

Our new issue – looking at what the Bernie campaigns accomplished and the work left to do – is out this week. Get a discounted print subscription today!

Senate Republicans copied key parts of New York governor Andrew Cuomo’s controversial corporate immunity law and pasted it word for word into their new coronavirus relief proposal released on Monday. The provision could shield health care industry CEOs, executives, and corporate board members from COVID-19–related lawsuits in the event that their business decisions end up injuring or killing health care workers and patients.

Executives from those industries stand to benefit from the corporate immunity provision that Senate Republicans spliced into their legislation.

Earlier this year, the Center for Public Integrity, USA Today, and the Arizona Republic won the prestigious Goldsmith Award for exposing how corporate interests write legislation and then convince lawmakers to splice exact replicas of bills into state laws across the country.

These new revelations about the corporate immunity provision show that the phenomenon can jump from states all the way to the federal government, whose statutes cover the entire country.

We previously reported that in April, Cuomo worked with a major health care industry lobby group to slip language into his state’s budget designed to block lawsuits against hospitals and nursing homes during the pandemic, as the casualty count exploded in New York. The provisions did not just cover frontline health care workers — it included language extending that protection to any “health care facility administrator, executive, supervisor, board member, trustee,” or other corporate manager.

Cuomo pushed the provision after his political machine received more than $1 million from the Greater New York Hospital Association.

We subsequently reported that the same exact language then spread to Massachusetts and North Carolina.

As with the New York law, the legislation expands the definition of who constitutes a health care provider to include “a health care facility administrator, executive, supervisor, board member or trustee, or another individual responsible for directing, supervising, or monitoring the provision of coronavirus-related health care services in a comparable role.”

“Governor Cuomo brushes aside criticism for his mishandling of nursing homes as Republican partisan politics, but as it turns out he has inspired Republicans to follow his policies,” said New York Democratic assemblyman Ron Kim, who has fought to repeal the immunity provision in New York. “Giving nursing home executives and health care corporations early blanket legal and criminal immunity was just wrong, plain and simple.”

The federal bill, which would preempt tougher state liability laws, limits liability to cases of gross negligence and willful misconduct — restrictions included in New York’s law. Gross negligence is already a tougher legal threshold to meet than ordinary negligence. Black’s Law Dictionary notes that there is no specific definition of gross negligence. The federal bill defines it as “a conscious, voluntary act or omission in reckless disregard of (A) a legal duty; (B) the consequences to another party; and (C) applicable government standards and guidance.”

Moreover, both pieces of legislation limit the scope of liability even further. The GOP bill specifies that “acts, omissions, or decisions resulting from a resource or staffing shortage shall not be considered” as opening the door to liability. All told, the language of the federal bill is nearly identical to the New York law. 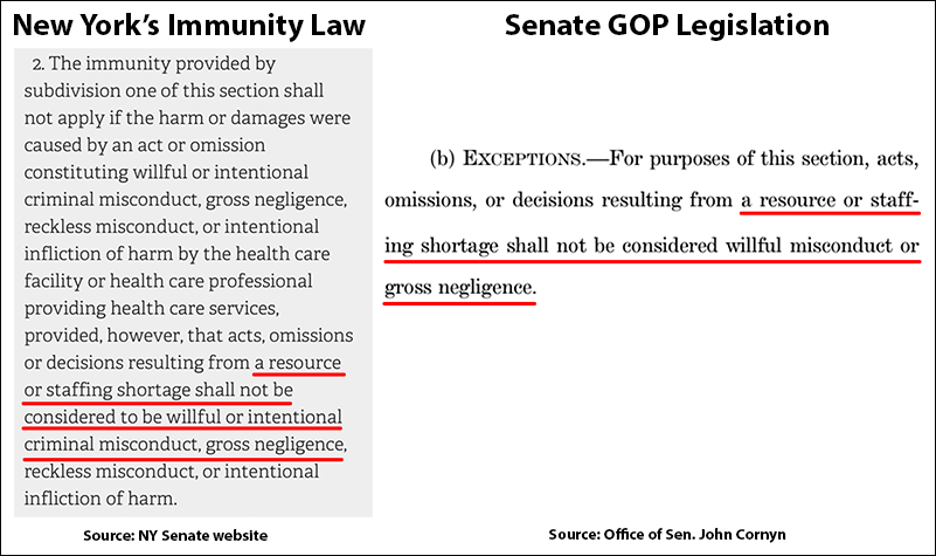 But if Senate Republicans pass their legislation in Washington, the New York statute will effectively become the law of the land in every state in the country.

During the 2020 election cycle, McConnell and Cornyn have collectively raked in more than $387,000 of campaign contributions from donors in the hospital and nursing home industries, according to data compiled by the nonpartisan Center for Responsive Politics.

Among senators up for reelection in 2020, McConnell and Cornyn are also the top two recipients of campaign contributions from donors in the insurance industry — with donors from Blue Cross Blue Shield being among Cornyn’s top overall contributors.

Kindred Healthcare employees and the company’s political action committee have donated $263,000 to McConnell over the course of his career. Last week, nurses and employees protested outside a Kindred hospital in Southern California demanding better personal protective equipment after sixteen workers tested positive for COVID-19.

McConnell and Cornyn have received more than $125,000 this election cycle from donors at the private equity giant KKR, and KKR donors are collectively among Cornyn’s biggest contributors during his Senate career. KKR owns the hospital staffing company Envision Healthcare, which has reduced some emergency room providers’ hours during the pandemic, according to ProPublica. The firm has been lobbying on “issues related to COVID-19 relief,” according to federal records.

Additionally, the Senate Leadership Fund — a McConnell-aligned super PAC — has raked in big donations from donors with a potential interest in liability protections for the health care industry.

For instance: Blackstone CEO Stephen Schwarzman gave the group $10 million in February, as the pandemic was beginning to spread in the United States.

Blackstone owns the hospital staffing company TeamHealth, which has cut some emergency room staffers’ hours during the coronavirus pandemic. TeamHealth has been lobbying on coronavirus legislation and lists former Republican Senate staffers as lobbyists, according to federal records. A Blackstone executive, Bill Mulrow, is a former top aide to Cuomo who was recently appointed by the governor to spearhead the state’s response to the pandemic.

The GOP’s Senate Leadership Fund also received $50,000 from W. Heywood Fralin, the chairman of Medical Facilities of America, which operates forty nursing and rehabilitation facilities in Virginia and North Carolina.