It’s been fun to see how the Center for American Progress (CAP) navigates this year’s presidential election. For insider political reasons, they can’t support Biden or Sanders. But for a long time, it was unclear who the alternative candidate they could support would be.

When Kamala Harris was rising, CAP’s staff was doing overtime boosting her on Twitter and in the press, including boosting Harris’s absurd health care proposal. But Harris’s collapse put an end to that strategy. Recently Warren has risen as the alternative, and so CAP has been working to promote her campaign, which puts CAP in the comical position of having to promote policies that they just a few months ago claimed were insane and politically suicidal.

No one has embodied the hilarity of this predicament more than CAP’s Topher Spiro, who has had to shoulder a lot of the weight of CAP’s election strategy because of his role as a health care guy. In shouldering this responsibility though, Spiro has frequently resorted to lying about Bernie Sanders in the hopes of boosting Elizabeth Warren.

Consider the following tweet by Spiro, which was made in a thread in which Spiro (absurdly) argues that there is a double standard in the discourse in which Warren’s Medicare for All (M4A) financing plan gets more scrutiny than Bernie’s does. 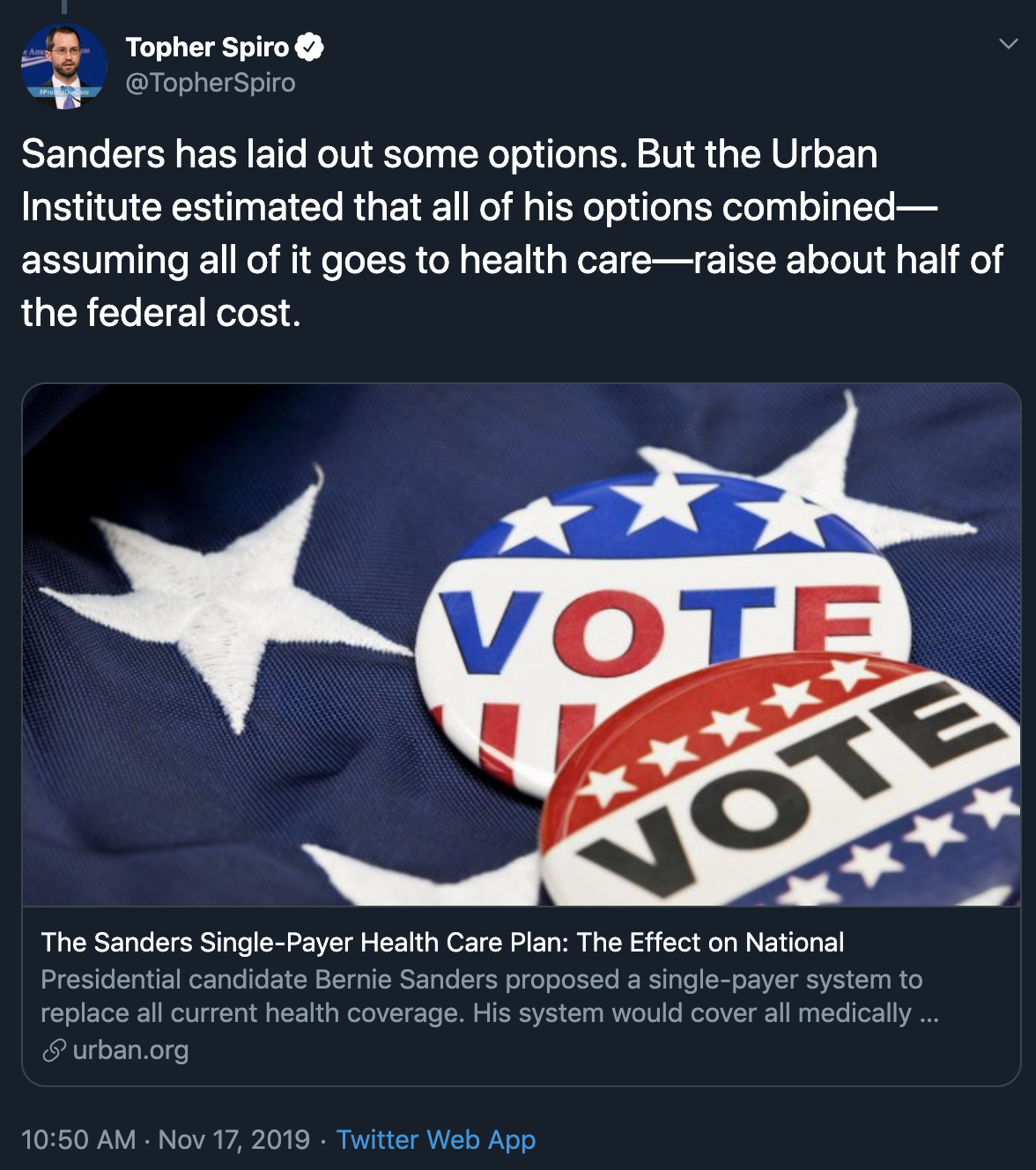 In this tweet, Spiro claims that Bernie’s list of M4A financing options (found here) was deemed by the Urban Institute to only cover half of the federal cost of M4A.

The first problem with this claim is that the Urban Institute report he links to is from May of 2016, while Sanders’s list of financing options was released in September of 2017. Barring some kind of time machine, the claim that this report is commenting on Sanders’s financing options list seems incorrect.

And of course, upon inspection, you see that Spiro’s claim is incorrect. The Urban report is an estimate of what national health expenditures would be under Medicare for All, and includes only a brief mention of the Tax Policy Center’s estimates of the revenue generated by all of Sanders’s tax proposals in the 2016 campaign. The report says nothing about Sanders’s M4A financing options for the obvious reasons that those would not be released for another sixteen months.

The second problem with this claim is that Warren’s financing proposal, which Spiro says is legitimate, also falls way short of Urban’s estimate of the cost of single payer. Urban’s updated estimate for the 2020–29 period says that a single-payer plan will require $34 trillion dollars of new federal revenue. But Warren’s plan, based on Warren’s own estimates, only raises $20.5 trillion. Warren makes up the difference between these two figures by claiming that Urban overstates the cost of Medicare for All by $7.4 trillion, and by stipulating that $6.1 trillion of existing state health care spending will be brought into a M4A pot through a “maintenance of effort” requirement.

If you allow Sanders to get away with trimming $7.4 trillion off of Urban’s cost estimate and bring in the $6.1 trillion of state health care spending, then his 2017 financing options also get you right up to the $20.5 trillion of revenue raised by Warren’s plan. Specifically, his 2017 list of financing options add up to $16.192 trillion, which is equal to about $19 trillion if you adjust them up to fit into the 2020–29 window. If you want to get the remaining $1.5 trillion, it’s as simple as noting that Sanders’s new wealth tax proposal raises $2.8 trillion more between 2020 and 2029 than his 2017 wealth tax proposal raised.

But somehow Spiro’s belief on the correctness of Urban’s estimates turns primarily on which presidential candidate they are being applied to. This is the sort of deception that Spiro and CAP more generally are engaged in.