Seventy-five years ago, at around noon on October 24, 1944, Werner Seelenbinder was beheaded with an axe — a penalty for treason against the Nazi state.

At the time, the bulky former Olympic wrestler weighted just 132 pounds. After being arrested for resistance activities, he spent almost three years and faced weeks of torture in nine camps. Seelenbinder’s incredible life, filled with opposition to fascism and advocacy for the rights of working people, made him a national hero in East Germany.

In the Federal Republic, however, his legacy was deliberately buried, a victim of Cold War anticommunism. 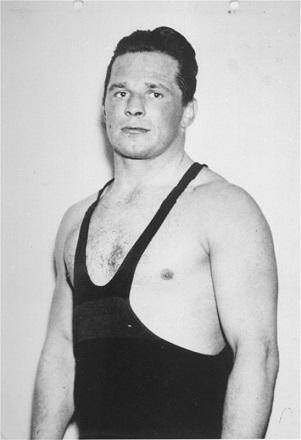 Born in Stettin — today Szczecin, Poland — in 1904, Seelenbinder grew up in Friedrichshain, a working-class neighborhood at the heart of “Red Berlin.” As a young worker in Friedrichshain, he witnessed the mass executions of revolutionary workers and soldiers during the March 1919 general strike, experienced mass unemployment and hunger, but also working-class self-organization and resistance.

Werner Seelenbinder’s ultimate passion was sports. As a young man, he joined the working-class sports organizations created by the mass workers’ parties and became a wrestler. In 1926 he went to the Soviet Union to participate in the “Spartakiad” — the proletarian alternative to the Olympics — only for this to cause his exclusion from the German Social Democrats’ own Workers’ Athletic and Sports League. He was then part of a split in the German labor movement’s sport organizations, becoming part of the Communist “Rotsport.”

This division was reflected at other levels of organization, though the Communists wielded little power in workplaces. In 1933 they and the Social-Democrats succumbed to Nazism, having failed to organize the kind of joint strike action they had mounted in 1920 faced with a previous coup attempt, the “Kapp Putsch.” Faced with Adolf Hitler’s victory, Seelenbinder wanted to go underground with other comrades in order to fight the Nazis. The party, however, convinced him to join a bourgeois sports club, so that he could continue his work there.

This was quite a success. In 1933, Seelenbinder became German wrestling champion, and during the public celebrations, he refused to give the Hitler salute. For this, he was taken to a concentration camp. After his release, however, he was readmitted to the German Wrestling Championship and again became national champion in 1935. Against the will of the Nazi regime’s “Reichssportleitung” he was then allowed to go to Stockholm and participate in the preparations for the 1936 Olympic Games, to be held in Berlin.

After the crushing of the opposition parties and the introduction of antisemitic racial laws, the Nazis wanted to use the Games to present Germany as a clean and good country. Responding to this, Seelenbinder and the illegal Communist Party themselves hatched a plan, centered on him receiving a medal. This would allow him to use the international live coverage, and the interviews with the medalists, to speak the truth about Germany’s concentration camps and the persecution of Communists, Social Democrats, trade unionists, and Jews — even if this meant his torture and death.

Unfortunately, the plans fell through, as Seelenbinder only came in fourth place.

Seelenbinder then continued his antifascist work in the Communist resistance to the Nazis. He became part of the Robert Uhrig resistance group, which had illegal Communist cells in many factories throughout Berlin. On February 4, 1942, the group was betrayed and Seelenbinder and many others were captured. Shortly he was arrested in his home, the Communist resistance fighter Erna Schmidt arrived at his apartment, as arranged, with more than 2,000 flyers concealed under her clothes. However, she managed to convince the Gestapo that she was merely a cleaning lady and survived.

Following his arrest Seelenbinder was dragged through several Gestapo prisons and concentration camps. He was tortured for eight days, but resisted and did not speak. He was then taken to Berlin’s “Arbeitserziehungslager Wuhlheide” labor camp, where the communist doctor Georg Benjamin — Walter Benjamin’s brother — was imprisoned. It was here that Hilde Benjamin — Georg Benjamin’s wife and the first (East) German woman to become Justice Secretary — secretly visited Georg Benjamin, together with their son Michael, who later become one of the most important influences on Die Linke leading light Sahra Wagenknecht.

In Wuhlheide, Seelenbinder and other Communists formed an illegal concentration camp committee. Yet their plans to escape were thwarted, as he was instead deported to the Brandenburg-Gören prison. It was here that Seelenbinder was executed by beheading on October 24, 1944.

On the morning of his execution, Seelenbinder wrote his farewell letter to his family and his lover Friedel: “Dear father, siblings, sister-in-law and Friedel! The hour of farewell has come. During my imprisonment, I have endured probably everything a human being can go through. Disease, physical and emotional pain — I was spared nothing. I so much would have loved to cherish with you, my friends and sport comrades the pleasures and joys that life after the war has to offer, the pleasures and joys I have now come to appreciate even more. After a terrible period of suffering, fate has now decided otherwise. And yet I know that I have found a place in your hearts and in the hearts of so many sport comrades, where I will stay. This knowledge makes me proud and strong and during my final hour it will not find me weakened.”

Indeed, he was defiant to the last: from his prison cell, he allegedly yelled out to the other prisoners: “Comrades! This is Seelenbinder! Today at noon, we will be executed. We have stayed strong! … Hitler will be defeated. Let us welcome the Red Army!”

A Legacy Worth Remembering

After the liberation from fascism, many East German streets and squares — and one of the biggest public meeting halls — were named after Seelenbinder. For instance, in 1975 this Werner Seelenbinder Hall played host to the United Nations’ five-day World Conference on Women, addressed by such figures as Angela Davis, Hortensia Allende, Frida Braun, and Valentina Tereshkova — the first woman in space. In 1992, the hall was torn down, and his name and memory were erased from many sites. The Cold War continued — the West, and anticommunism, had triumphed.

Yet this was not to last — and Seelenbinder’s name would be saved from oblivion. In 2004, the Sport Park in the West Berlin district of Neukölln, where he had trained for the Olympics, was renamed the “Werner-Seelenbinder-Sportpark,” and in 2008 he was inducted into the “German Sports Hall of Fame.” In 2017, the “Allende District” civil society organization in the East Berlin neighborhood of Köpenick renewed a memorial that had disappeared after unification in 1990, praising “The courageous fighter against fascism, imperialism and war: Werner Seelenbinder.”

Seventy-five years on from his death, this memorial to the wrestler and communist directly faces the headquarters of the neo-Nazi NPD, as if to cry out the old slogan, “Fascism — never again!”