This has led to a crisis of “stagtration” — a combination of stagnation and rising concentration — in the advanced economies, in which economic gears are no longer greased with the expenditure of the working and middle classes, as the wealthy stockpile the income that would otherwise propel the economy. To seize the opportunities that will present themselves in the near future, leftists and socialists need to understand the processes at work.

Like all advanced economies, the Australian economy is stagnating. Low growth rates are the new normal as upward wealth concentration increases unabated. In April, the IMF revised its global growth forecast for 2019 down from 3.6 percent to 3.3 percent. The growth of advanced economies in 2019 is forecast to be 1.8 percent before slackening to 1.7 percent next year. At the same time locally, the Australian Reserve Bank hacked its 2019 national growth forecast from 2.5 percent to 1.7 percent. 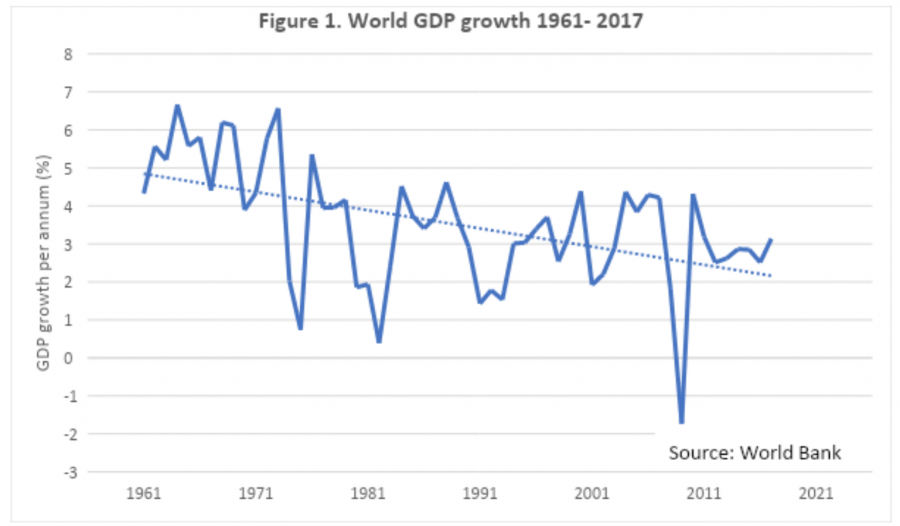 The increasing inequality that has become the hallmark of our times can also be traced back to the early 1970s. Figure 2 illustrates the growth trend from 1967 to 2014 (left axis), charted against changes in the share of national income going to the richest 1 percent (right axis) in four of the largest capitalist economies. The divergent tendencies — rising inequality and declining growth — are clear, and this pattern can be seen to varying degrees across the industrialized world. 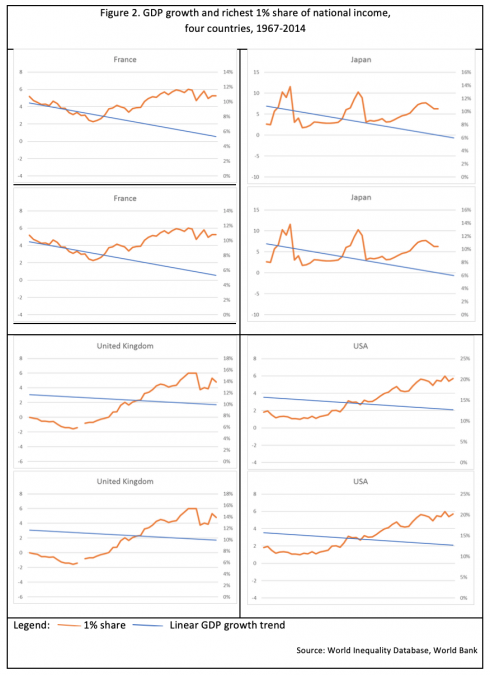 These figures demonstrate how pivotal the shocks of the early seventies were. Advanced economies, particularly those in the Anglosphere, experienced recession, high inflation, and high unemployment simultaneously. Labeled “stagflation,” this confluence of economic problems had previously been thought mutually exclusive.

Keynesianism’s crisis was the opportunity free marketeers had sought and prepared for. In 1972 Milton Friedman was president of the Mont Pelerin Society, the granddaddy of right-wing think tanks. As government economic planners floundered, the neoliberal movement emerged with coherent-sounding solutions. As their solutions were taken up en masse by governments in the advanced economies and pushed on the rest of the world, the new normal of privatization, lower taxes, and low government expenditure was remarkably successful at enriching their backers. But built into their schematics for a wealthier 1 percent is a death drive: stagtration.

Inequality had been a burning issue long before Piketty’s timely tome dropped in 2014. An instant classic, it joined No Logo and Don’t Think of an Elephant in that elite club of works that crystallize what vast amounts of people are feeling at a stage in history.

The book has two main points:

This latter is explained using what Piketty calls the second fundamental law of capitalism — β = s / g — where β is the long-run capital/income ratio, s the savings rate, and g the growth rate of national income. The ratio is expressed in years of national income, so a country that grows its income 2 percent annually and saves 10 percent of it will have accumulated capital equivalent to five times its national income. This is a law of a general tendency over time, representing the state of equilibrium to which an economy will tend.

According to the law, slower growth results in a greater stock of capital relative to income. (It is also important to note that Piketty did not come up with the formula; it has been in use since the 1930s, commonly in the form, g = s / β, i.e. a greater capital/income ratio relative to savings slows growth.)

According to the theory, as capital increases its importance relative to income earned from labor, growth slows, which leads to greater capital accumulation, which further slows growth, and so on. Does this relationship stand in practice? In Figure 3, historical statistics on Australia’s capital/income ratio are graphed against GDP growth. Since 1995, when the ratio has nearly doubled, growth rates have decreased from high three percents to low twos (i.e. nearly halved). Savings rates have been stable through this period. 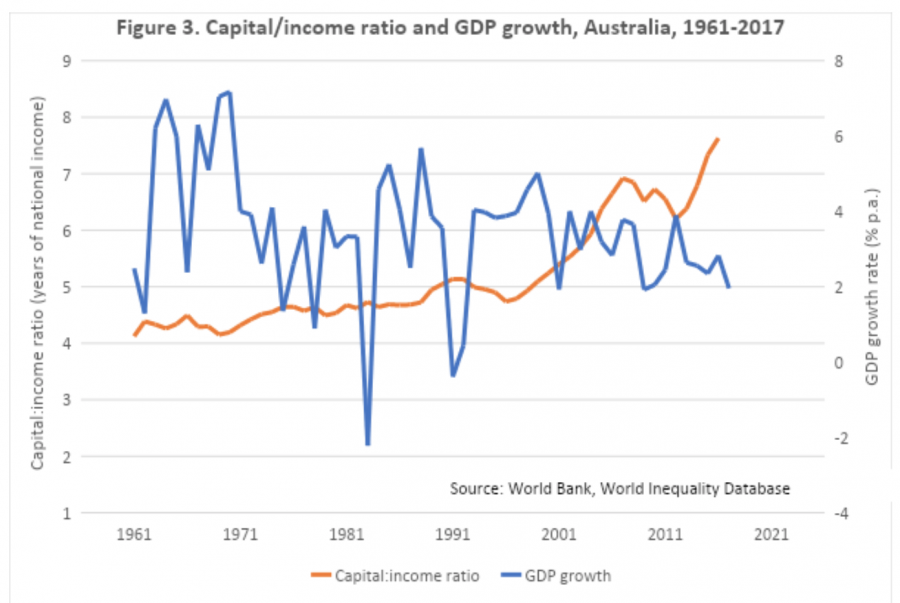 As in the rest of the capitalist world, the capital/income ratio in Australia is returning to rates seen in the late nineteenth century. In stagnating economies, where the rate of return on capital exceeds GDP growth (r > g), wealth, particularly that accumulated in the past, acquires disproportionate importance relative to income from labor. This, in turn, feeds slower growth. This death spiral of neoliberal economics that Piketty outlined only five years ago and predicted would evolve over the twenty-first century is now playing out in fast motion before our eyes.

The fact that inequality is increasing and is a cause of slower growth is widely accepted. IMF research has repeatedly found that higher income shares at the top end harm growth by reducing aggregate demand as the wealthy spend a lower fraction of their incomes than the working and middle classes.

That wealth and income are continually being redistributed upward is only controversial among neoliberal ideologues and the resentful upper classes who cluster around the opinion pages of right-wing news. Conservative economist Judith Sloan, writing in the Murdoch-owned the Australian, got herself in a jumble last November, taking on a trade union claim on wage shares:

According to Sally McManus, “labor’s share of national income is at a fifty-year low,” but a cursory glance of the chart tells us that the labor share is pretty much where it was fifty years ago.

The chart Sloan included had the most recent labor share lower than in 1967, and the lowest it had been in the intervening half-century, at a level only seen briefly following the global financial crisis. Lower than at any point in the past fifty years is what a fifty-year low means. The willful blindness of elites in their attempts to counter these points only serves to highlight the paucity of legitimate arguments they can rely on.

If you follow these debates in Australian papers like the Australian you will also catch throwaway references to “false” or “disproved” inequality claims. To support this line, conservative commentators draw on an official Productivity Commission report released last August. This was styled as a nonpartisan “stocktake of the evidence” on inequality. It found that wealth inequality (measured by the Gini coefficient) had increased over the past twenty-seven years but evidence on income inequality was mixed. The Gini coefficient for income based on the Australian Bureau of Statistics Household Expenditure Survey (ABS HES) had increased noticeably, but another calculation using the Household, Income and Labour Dynamics Survey was stable.

The report put great stock in the ninety to ten income ratio that showed that those at the ninetieth percentile of income had consistently received almost four times the income of those at the tenth percentile. (To be at the tenth or ninetieth percentile means to earn more than 10 percent or 90 percent of all households.) A better “stocktake” of the evidence would have included some ratios involving the top 10 percent, where income growth is concentrated. For example, the average income among the top 10 percent in 1989 was 6.9 times that of the bottom 10 percent; by 2016 the ratio was 8.2. These statistics would likely be even more skewed if, say, the income growth of the top 1 percent were examined. The argument from Sloan and company that rising inequality is “false” relies on a cherry-pick of a cherry-pick.

Propaganda like this is designed to soothe anxieties — anxieties that arise when people get a sense that inequality is indeed increasing. Not only is labor’s share of income at a fifty-year low, but Australia’s welfare system has become one of the worst in the developed world. The unemployment payment, Newstart, hasn’t increased in real terms since 1994. Australia’s jobless population is the second-poorest among thirty-three comparable nations, with 55 percent of those unemployed living in poverty.

Meanwhile, Anthony Pratt, Australia’s wealthiest man, increased his wealth in one year from $12.9 to $15.6 billion. That’s 1,113,586 years of Newstart payments. Four decades of favoring property holders over wage earners have created a sizeable minority of people who make money while they sleep off rent, dividends, and interest. They don’t like any suggestion that their wealth might be the result of inheritance or government subsidies, or gained at the expense of others. They also don’t like any suggestion that their passive accumulation of a greater and greater share of wealth is responsible not only for the stagnant wages of most Australians, but the gradual decline of the economy’s momentum.

Of course, it was over the privileges enjoyed by this class that the recent Australian federal election was fought and lost. This will no doubt lead to declarations that cutting tax breaks for corporate shareholders (so-called franking credits) and for leveraged property owners (“negative gearing”), Labor’s much-vaunted progressive policies, are political no-go’s, as were the rivers of gold that are still being tipped into private schools since Mark Latham lost in 2004 — another instance of Labor confusing a dud leader’s inability to sell modest Laborist policies with the death of left reform.

What leftists need to take from this early skirmish in a much larger battle is how resentful those whose wealth is propped up by the neoliberal state are, and how hard they will fight against any attempts to rein in the party. As Guy Rundle argued during the campaign, attacks on a couple of the sacred cows of the Australian investor class, presented in technical terms by Shorten and Bowen, in the absence of a compelling narrative were not sufficient. A well-framed anti-stagtration argument — that the Australian working and middle classes are the engines of our economic growth and their empowerment must take priority — could have helped.

Genuine political leadership often involves telling difficult truths to your base. In 2019, a wage breakout is needed, but don’t hold your breath. Can anyone picture conservative Prime Minister Scott Morrison calling the employer associations to Canberra to tell them that, in the national interest, they are going to have to hike their workers’ wages up and tighten their own belts for a bit? Australia’s employers and rentiers are utterly incapable of self-reflection on how the policies that have elevated them might be damaging the country. Their answer to every economic problem is more “reform,” by which they mean wage cuts and business tax breaks.

The problem for them is that it doesn’t work. Serious economic planners with real responsibilities know this. It is why the IMF keeps drawing attention to inequality and our reserve bank governor says wages need to rise every time he speaks in public. Fiddling with the usual economic dials — interest rates, tax cuts — can’t get neoliberal capitalism moving.

Increasingly, the business pages discuss “unconventional” solutions such as quantitative easing (QE) and “helicopter money.” This is a sign of panic, but these measures won’t turn around stagtration if they are not used to undo decades of entrenched inequality. The use of QE in the United States has only puffed up the financial sector, although it has usefully lifted the taboo on printing money to address economic problems.

Neoliberalism is spent. For a system that claimed the greatest good would be served by facilitating sociopathic greed, it had a decent run, but not only is the current economic paradigm morally repulsive, it is also failing on its own terms. Entrenching inequality drains the life out of the economy and, as a consequence, it impoverishes workers and the poor. You might say that capitalism is parasitic — but an effective parasite is one that doesn’t kill its host.

So the Left arrives at its early seventies moment. We must seize the opportunity and make the case that contrary to the prevailing conception of the wealthy as wealth creators and engines of the economy, they are actively destroying not only the incomes of the working class, but the entire economic system. The choice is increasingly stark: an endless downward spiral or radical economic change.