Our new issue – looking at what the Bernie campaigns accomplished – is out next month. Subscribe in print today!

Our new issue – looking at what the Bernie campaigns accomplished and the work left to do – is out next month. Get a discounted print subscription today!

Predictably, polls like this have been fueling a talking point, shared by the reactionary right and liberals alike, that voting for Sanders is an expression of ignorance and unintelligence. A typical take from the right-wing American Thinker:

With Venezuela’s grand failure of socialism, it would probably take a stupid person to ever support the idea of electing a socialist candidate here. Sure enough, something like it is going on.

Anyway, another poll recently came out that asks the same question — but breaks the numbers down demographically, instead of by candidate. From the latest YouGov / Economist survey: 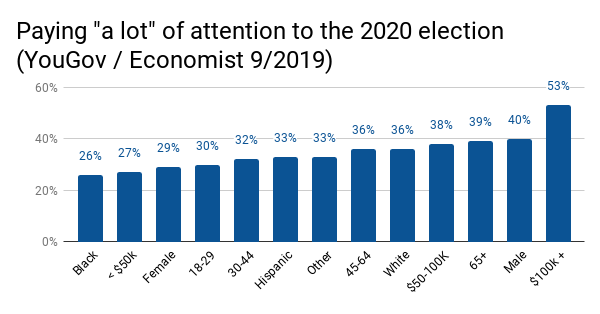 So, what’s going on here? As far as I can tell, there are two plausible interpretations:

I know which of these conclusions pundits on the Right will endorse. The interesting question is: What do Sanders critics on the liberal left think?