You can excuse the laziness, because we did manage to publish close to eight hundred essays in 2015. And many of them were quite good.

Before the rundown of our 2015 hits, a public service announcement. It’s still December, which means we’re still fundraising, just like every other organization you made the mistake of once giving your email to. Until midnight PST, all donations to Jacobin will be matched. Our next issue will be out in a few weeks too, so be sure to subscribe or renew your subscriptions. And we’re still hard at work on our ABCs of Socialism project (update coming soon).

We know you’re being bombarded by these sorts of appeals — and we’ve already done our fair share of bombarding — but if you’ve appreciated our work in 2015, please help us continue it into the new year.

We started off the year talking about “when rioting is rational” and why the NYPD is useless.

We also closely covered Syriza’s rise to power (or at least government) and framed the choice from the very beginning as one between confrontation or capitulation.

In February, we published the first of five Noam Chomsky interviews we ran in 2015. Chomsky’s generosity with his time is legendary, and we took full advantage. (Resolution for 2016: be more like Noam.)

We talked about the promise and limits of the welfare state and scolded some social democrats. 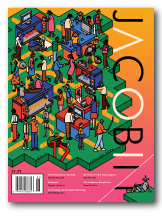 Spring was upon us, and with it came a new issue of Jacobin. This one focused on technology and politics and was our most cohesive yet. (If you missed your chance then, we’re still selling copies for only $12.) Fittingly, we paid our respects to Leonard Nimoy that same month.

We also discussed why so many progressive narratives about mass incarceration don’t add up and why blaming all of humanity for climate change lets capital off the hook.

Since all the kids seem to be talking about the “sharing economy” nowadays, we planned the socialization of Uber.

Baltimore rose up, we talked about the future of capital punishment, and launched Nicole Aschoff’s New Prophets of Capital.

Bernie Sanders announced. Some of us cheered, others were more skeptical. We debunked “creative class” myths, looked at what the US military was doing in Africa, and remembered Thomas Sankara.

Who doesn’t want to work less (can’t you tell that these blurbs are getting progressively shorter)?

We covered Turkey’s election and mourned the once mighty Italian left. We also talked about the social construction of race, and why it was conjured in the first place. Later in the summer, we tried to figure out why liberals separate race from class.

If you’re a “patriot,” you probably didn’t want to hang out with us at a Fourth of July barbeque. We were into Bastille Day, though.

We busied ourselves covering the Greek referendum and the road not taken. Things were looking better in Scotland, though. More appeals to build a rank-and-file labor movement capable of fighting hard to work less hard.

We remembered the ten-year anniversary of Hurricane Katrina, and thought about what a just reconstruction would have looked like and the hell residents got instead. 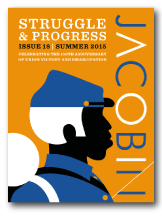 On a happier note, we also released our special issue marking 150 years of Union victory and emancipation. We liked it so much we ended up doing two printings, turning out a total of twenty thousand copies.

Jacobin also put out our most popular piece ever: a look inside Burning Man’s psuedo-radicalism.

Megan Erickson’s Class War: The Privatization of Childhood was released. The media tried to paint German chancellor Angela Merkel as a champion of refugee rights.

The middle of the month saw a tragic attack against Kurdish and other leftist activists in Turkey. We wrote about US actions in Latin America, recalled the young Ho Chi Minh, and turned five years old.

Donald Trump was in the national spotlight — but who is the audience for his demagoguery?

We discussed the first Democratic primary debate and got Mike Davis to write about Bernie Sanders. Benjamin Netanyahu said some crazy shit about Palestine and the Holocaust. 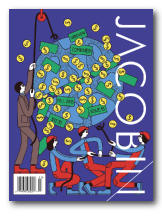 Questions: is anyone still reading this? Why are so many working-class whites dying prematurely? How will the French state respond to a tragic terrorist attack? Is Bernie Sanders a socialist?

We released our fall issue, covering development in the Global South. It was very good — get a copy.

The stakes for COP21 couldn’t have been higher — we needed a stronger left to get a stronger agreement.

More questions: how can one be an anticapitalist today? Where did ISIS come from? Is Donald Trump a fascist?

We took another look at Naomi Klein’s latest book, This Changes Everything, and the state of environmental politics. The Chicago Teachers Union is ready to strike, workers in Kohler were just on strike. Spain voted, and we looked at the rise of Podemos and the ideological background to the party.

The media was confused about the DNC “Datagate” scandal, and we did our best to inform — fair and balanced. In the wake of the Planned Parenthood attack, we talked about the vital struggle for abortion rights.

Our next issue — the first of four to come next year — will focus on the rise and fall of the welfare state and the kind of alternative we need. We’ll also have a handful of books and supplements out and something like a thousand more essays for you to read. All we need is a few dollars, and for you to encourage your friends to subscribe.