A month or two ago, Bhaskar Sunkara came to me with the idea that we could, on a short deadline, turn our long-running discussions about the future of progressive politics in the United States into a “Piven-Cloward plan for the 21st century” for the cover of In These Times magazine. This was, of course, an insane proposal, combining the intellectual hubris of a mid-twentieth-century French philosopher and the slapdash work ethic of an undergraduate pulling an all-nighter. But I’ve learned by now not to doubt Bhaskar’s crazy schemes, so naturally I signed on.

You can read the resulting product here, and Francis Fox Piven herself also weighs in with an editorial in the issue. I don’t know whether we accomplished our grandiose aims, but I’m happy we at least made a case for something that’s long been discussed on the left, and which doesn’t get nearly enough attention: the need to shift responsibility for social policy from states and localities to the federal government.

In the essay, we make our case primarily on fiscal grounds, pointing out that the limited ability of sub-national governments to run deficits almost inevitably leads to a politics of austerity. But there’s another aspect to this that we didn’t really talk about, which is the regional structure of American politics. Reactionary approaches to the welfare state are particularly characteristic of the South, both its culture and its political economy. Federalizing social policy is therefore both an act of solidarity with the working class of that region, and a move toward completing the class project of the Civil War.

As we note in the essay, Republicans — Romney and Ryan included — favor the inverse of our strategy, and advocate devolving social policy to the states. This has broadly negative consequences for the beneficiaries of such policies, but it has particularly bad implications for the residents of conservative states. Those states, as Jonathan Cohn explains in the New Republic, are markedly stingier about social welfare spending. They also happen to be, by and large, the states with the most poor people. (This is, incidentally, what gives rise to What’s the Matter With Kansas–style fallacies about poor people voting against their economic interests, due to the phenomenon of rich people living in poor states being more strongly Republican.)

This bifurcation of state-level social policy, which Cohn glosses as “Blue States are from Scandinavia, Red States are from Guatemala,” also has a strongly regional pattern. Consider the following image, from the sidebar to Cohn’s article: 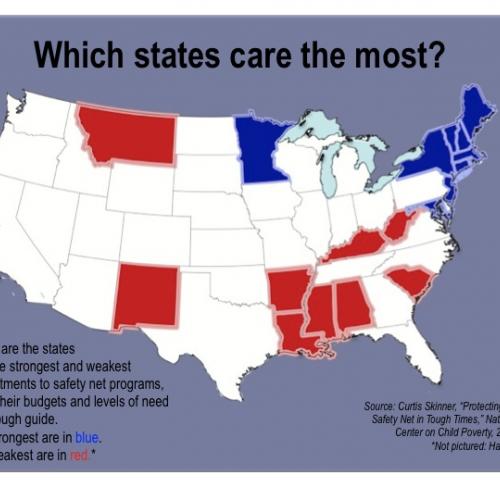 The division between our local Scandinavias and Guatemalas tracks a very old North-South division in American politics, which is where the Civil War comes in. Michael Lind recently argued at Salon.com that:

Lind goes on to argue that:

Notwithstanding slavery, segregation and today’s covert racism, the Southern system has always been based on economics, not race. Its rulers have always seen the comparative advantage of the South as arising from the South’s character as a low-wage, low-tax, low-regulation site in the U.S. and world economy. The Southern strategy of attracting foreign investment from New York, London and other centers of capital depends on having a local Southern workforce that is forced to work at low wages by the absence of bargaining power.

Centralizing welfare policy is therefore a way of avoiding a situation that pits the residents of the liberal states against an immiserated workforce in the South. This is an act of principled solidarity—a refusal to simply leave Southern workers to deal with their conservative elites on their own — but also a pragmatic necessity. We may not yet be able to demand a global social democracy, but we can at least avoid an invidious race to the bottom with our fellow Americans.

Our essay concludes by envisioning the welfare state as a foundation for freedom:

Freedom to give their children an education without rival. Freedom from poverty, hunger and homelessness. Freedom to grow into old age with pensions, Social Security, and affordable and accessible healthcare. Freedom to leave an exploitative work environment and find another job. Freedom to organize with fellow workers for redress.

The decommodification of labor that’s entailed by egalitarian social policy is a partial emancipation from the unfreedom of the workplace. The stakes in this debate are therefore much higher than simply the existence of a “safety net” or a rudimentary social wage. It’s about giving workers the confidence and the material security necessary to make bolder demands for social change.

You sometimes see Trotskyist sectarians using the slogan “Finish the Civil War! Black Liberation Through Socialist Revolution!” But before we get around to the revolution bit, just getting a robust national-level welfare state would in itself be a big step toward the completion of the emancipatory project.