In a recent post, Daron Acemoglu and James Robinson offered a familiar argument about the origins of mass incarceration in the United States:

Could this be the basis of the new Jim Crow? Could the incarceration of so many black men be a continuation under a different guise of the penal system that developed in the South after Reconstruction? Could this be, paraphrasing Robert Michels and our own use of his Iron Law of Oligarchy,”the Iron Law of Discrimination”?

To support their “New Jim Crow” interpretation, Acemoglu and Robinson draw on the work of David Oshinsky, whose book Worse Than Slavery examines the development of convict labor as the lynchpin of Jim Crow era black labor control.

There are two aspects of the “New Jim Crow” interpretation that make it superficially convincing. First, incarceration is a system of social control. Second, black men are incarcerated at disproportionately high rates. Here, for instance, is Acemoglu and Robinson’s chart for White, Hispanic, and Black male incarceration: 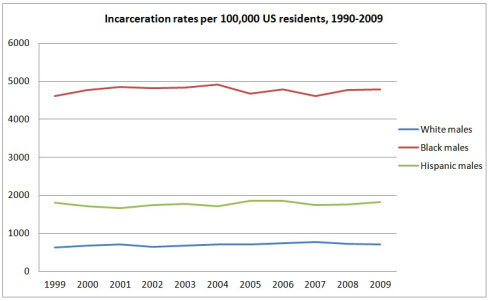 So it appears that there is a racialized system of social control, the present one analogous to the past one — a new Jim Crow.

However, there are some very important differences between the political economy of the mainly agrarian, Jim Crow penal system and the current, urban system of mass incarceration. If the penal system functioned as a system of social control in both eras, the aim of that social control was very different. In the Jim Crow era, the central issue was how to get formerly slaves to work for their former masters on the plantations now that blacks enjoyed a nominal freedom. As Eric Foner showed in his classic Nothing But Freedom, turning former slaves into an agricultural proletariat is the central political question of all post-emancipation societies. The shift from coerced slave labor to forced wage-labor is not a natural one, and emancipated slaves often have a different idea about the freedom they ought to enjoy than former masters. As Foner showed, in the Reconstruction South, blacks preferred just about anything to selling their labor to former masters. They engaged in subsistence farming, moved to cities, and in some cases — such as in Edisto Island — they occupied former plantations and ran the farms themselves, until the end of Reconstruction brought an end to their political and social power and land was returned to former slave masters.

Even under those conditions, former slaves were recalcitrant wage-laborers — the dull compulsion of economic need was insufficient to meet the labor needs of Southern employers. Foner details the way Jim Crow era criminal law was used not just to produce convict labor, but to eliminate all other employment options for blacks (self-employment, use of public lands, lynching of those who tried to leave, criminalization of vagrancy and debt). With no other economic options, “free” wage-laborers were forced to sell their labor to former employers. As the Committee of the Freedmen of Edisto Island said, in their reply to the Freedmen’s Bureau, which had asked the former slaves to return land on which they were homesteading to its former owners:

General we want Homestead’s; we were promised Homestead’s by the government . . . [but] the government Haveing concluded to befriend Its late enemies and to neglect to observe the principles of common faith between Its self and us Its allies In the war you said was over, now takes away from them all right to the soil they stand upon save such as they can get by again working for your late and thier all time ememies.

This criminalization of a use of land (homesteading) that had been promised to slaves was, as the Edisto freedmen saw, a way of removing all options save “freely” “working for . . . their all time enemies.”

So the main purpose of the penal system under Jim Crow was not to produce the directly coerced and cheap convict labor itself, though that was certainly a part of the regime of exploitation, but to produce a forced labor regime with nominally free labor. (Lest we think this was merely a Southern project, as Richard Bensel showed in Yankee Leviathan, the North was content with this new regime of controlled labor. Financiers were happy since it brought cotton back online — and thus foreign exchange to pay back debts and stabilize the dollar — and industrialists were now more concerned with the emerging problem of labor control, and increasingly troubled by the precedent set for the North by redistributing land and property to Southern freedmen.)

Robinson and Acemoglu thus mischaracterize the specific problem of social control in this period when they characterize the “practical problem” of Jim Crow in the following way:

now that blacks were no longer slaves and could not be directly disciplined and punished by their masters, how should they be kept under control? Locking them up — when mob violence and lynchings didn’t do the job — seemed like a natural idea, but this would cost the state a lot of money, especially at a time when resources were scarce and the prison system was both underdeveloped and severely gutted by the Civil War.

The problem was not a “general” one of how to control free blacks, but a specific modality of social control: how to produce a docile agricultural proletariat. Though Acemoglu and Robinson are sensitive to the thought idea that underlying Jim Crow was a particular “extractive regime,” they miss the way in which Jim Crow was a kind of exercise in primitive accumulation. One of the key features of primitive accumulation is the use of direct coercion until the wage-labor/capital relationship is naturalized — at which point Marx’s famous “dull compulsion of the economic” takes over. The political struggle, at least for a brief time, during Reconstruction was whether emancipation would mean real liberation — Jim Crow settled the question securely in favor of former plantation owners, and the criminal law was the central instrument through which wage-labor was instituted.

The social control problem of the 1970s was decidedly different. It was as much if not more Northern and Southern, it was as much if not more urban than agrarian — indeed the urban race riots of the late 1960s and early 70s were a key precipitating event, alongside racial mutinies on the front lines of Vietnam, the rise of the Black Panthers, and the civil rights struggle. But in the background, the key political-economic shift was not from slave to proletariat, but from proletariat to lumpenproletariat. The flight of middle class blacks from desegregating inner cities, deindustrialization, the loss of jobs in the North, and increasingly concentrated urban unemployment among black males produced a surplus labor population. The role of the criminal justice system in this context was to police an underclass, not make workers out of slaves. And it became increasingly so as other, more benign, modes of social control — like welfare, public housing — sputtered. This new carceral regime invovled the state taking on direct responsibility for control of a population now that it lacked a strong tie to economic life. And it did so by criminalizing one of its few economic activities: drugs. The war on drugs was the pivotal instrument for introducing this new form of social control. It not only massively increased the prison population, but subjected them, and urban black communities more widely, to the continual supervision of public coercive authority. The statistics are familiar, but here is a chart from the Bureau of Justice (H/T Kareem Reda for forwarding the image from the Sentencing Project) 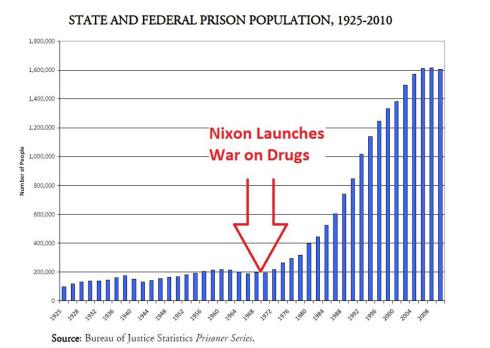 Note that just as the use of convict labor dwindles the prison population explodes. Where during Jim Crow convict labor and the criminal law was an appendage of the wider, Southern agricultural political economy, in the new era of mass incarceration it is imprisonment that is the point. Being jailed or being threatened with imprisonment is the instrument for containing the problems left by the failure of society to deal with mass unemployment not mass unwillingness to sell labor. Put another way, under Jim Crow the point of criminalization was to create wage-laborers, under the drug war the point is to create criminals.

In both cases, there are/were better alternatives. The freedmen could have been given forty acres and a mule. Urban blacks could be given jobs (not to mention legalize drugs) rather than rap sheets. But in both cases, blacks needed the political support of non-blacks — always a real though fragile possibility. And in both cases, the penal system served not just to control black populations, but also to divide them from their potential allies.