Democrats are threatening to hold up President Joe Biden’s signature infrastructure plan, which relies heavily on tax increases, in the hopes that Biden will eliminate the cap on the state and local tax (SALT) deduction. Leading the charge is the bipartisan SALT Caucus, a group of US representatives who mostly represent wealthy districts in blue states.

But the members of the SALT Caucus aren’t just looking out for their wealthy constituents. Three of the ten leaders of the SALT Caucus — Democratic Reps. Josh Gottheimer, Mikie Sherrill, and Jamie Raskin — pay more than $10,000 in property taxes, according to property records reviewed by the Daily Poster. If the SALT cap was eliminated, those three representatives would together be able to deduct more than $75,000 on their federal taxes that they wouldn’t be able to otherwise.

In the Senate, two Democratic champions of repealing the SALT cap, Cory Booker and Chuck Schumer, also stand to gain considerably from reinstating the tax break.

On Sunday, Sen. Bernie Sanders spoke out against the effort to waive the SALT cap, telling Axios that “it sends a terrible, terrible message when you have Republicans telling us that this is a tax break for the rich.” And Rep. Alexandra Ocasio-Cortez, one of the only members of the New York congressional delegation to oppose lifting the cap, called the SALT deduction a “gift to billionaires.” 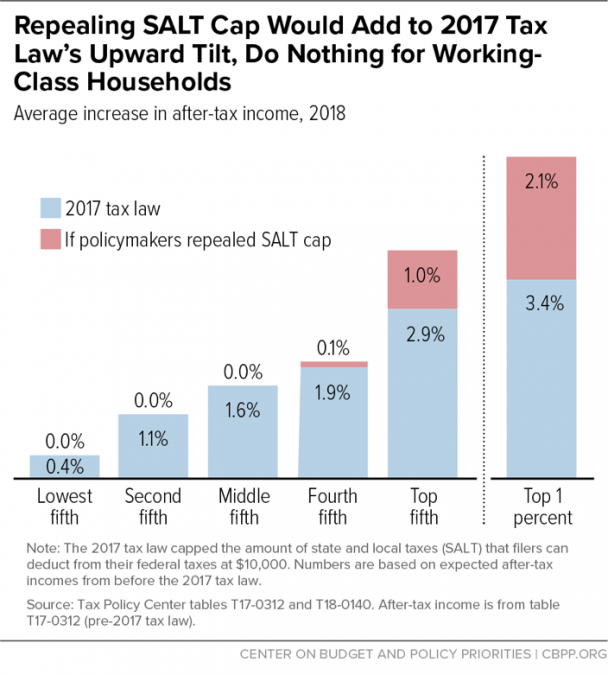 The SALT tax deduction allows state and local taxes like property taxes to be deducted from federal taxes. The deduction is particularly beneficial to wealthy property owners in Democratic states, which typically have higher property tax rates. In 2017, the deduction was capped at $10,000 under President Trump’s tax reform bill, in what many saw as a Republican attack on blue states.

Repealing the SALT cap would cost the government $600 billion in revenue over nine years. That outlay would essentially negate any financial benefits from the Democrats’ proposal to raise the corporate tax rate from 21 percent to 25 percent, the party’s preferred alternative to Biden’s proposed 28 percent corporate tax rate. With all of the money from raising the tax rate being funneled back to wealthy homeowners, there would likely be little money left to fund Biden’s infrastructure package.

In the House, the fight against the SALT cap is spearheaded by a bipartisan SALT Caucus. The Caucus’s thirty-two founding members include progressive stalwarts like Rep. Katie Porter (D-CA) as well as Republicans from blue states like Reps. Chris Smith (NJ) and Kim Young (CA).

Last month, members of New York’s congressional delegation, including several lawmakers who are part of the SALT Caucus, threatened to vote against any tax bill that didn’t eliminate the SALT cap, a move championed by the state’s scandal-plagued Democratic governor, Andrew Cuomo.

Gottheimer, the cochair of the SALT Caucus, owns property in Wyckoff, New Jersey, worth $1,997,900, copies of state property records show. Gottheimer’s tax bill on the property is $35,603 this year.

Sherrill, a Democratic vice chair of the SALT Caucus, owns property in Montclair, New Jersey, worth $1,895,400. Sherrill’s property tax bill on the property this year is $59,629.

Raskin is another Democratic vice chair of the SALT Caucus and owns property in Takoma Park, Maryland. Raskin’s property was assessed at $834,833, according to Montgomery County property records. This year, Raskin owed $13,132 in state and local property taxes, less a $692 tax credit, copies of the property records show.

Altogether, if the SALT cap was lifted, these three leaders of the SALT Caucus would be able to claim more than $75,000 in additional SALT deductions.

Spokespersons for Gottheimer, Sherrill, and Raskin did not say whether the lawmakers planned to claim the larger deduction should the SALT cap be lifted.

“Hardworking families in states like New Jersey are still bearing the burden of the disastrous Trump tax cuts that gave handouts to wealthy corporations at the expense of the middle class,” Booker said of the legislation.

Booker would be among those who could benefit personally from repealing the SALT cap. In 2017, before the SALT cap was implemented, Booker took a $32,486 SALT deduction, according to his 2017 tax returns that he released during his run for president. In 2018, Booker would have been eligible for a $36,026 SALT deduction based on the state and local taxes he paid, yet because of the SALT cap, he was only able to write off $10,000 of that tax bill.

If Schumer and Booker had their way and the $10,000 SALT cap was repealed, they would once again be able to deduct considerably more than $10,000 in state and local taxes from their federal tax bills. In 2018 alone, the two would together have been able to claim more than $90,000 in additional SALT deductions.

Spokespeople for Schumer and Booker did not respond to requests for comment.